The backing of cosmetics giant Puig means Dries Van Noten is no longer weighed down with the responsibilities of the independent creator. But there's also the passage of time. Older, defiantly not wiser. 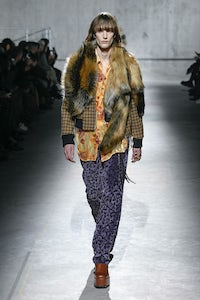 The backing of cosmetics giant Puig means Dries Van Noten is no longer weighed down with the responsibilities of the independent creator. But there's also the passage of time. Older, defiantly not wiser.

PARIS, France — Did I just hear an orgasm on a Dries Van Noten soundtrack? Yes I did! It was Girl Band’s climax, but it was Van Noten’s newly radiant faith in the transformative power of male sexuality that brought such unlikeliness to pass.

Events have conspired to liberate Dries. The backing of cosmetics giant Puig means he is no longer weighed down with the responsibilities of the independent creator (Bills to pay! Mouths to feed!). But there's also the passage of time. Older, defiantly not wiser. Just as Rick Owens, a couple of years younger, showed a collection fired up by the transgressive joy of early ’70s glam rock, Van Noten swandived into the pop decadence of the same era. It was Helmut Berger vamping in drag as Dietrich in The Damned, it was the New York Dolls, feather boas and platform shoes, it was Iggy Pop howling Raw Power in sprayed-on metallic leather pants while the Stooges thundered away behind him. “Anything goes,” said Dries.

It started last summer, this heightened appetite for new sensations. Van Noten hit the waterfront with a men’s collection threaded through with the lethally excessive lifestyle of movie director Rainer Werner Fassbinder. Then came his women’s collection in collab with Christian Lacroix, glorious excess on an entirely different level. “You don’t ask too many questions, you just go for it,” reflected Van Noten. He charged into his new collection with that spirit. Silky shorts or check shirts traced with diamante? Faux fox-trimmed denim? Tiger-print jeans? Go for it!

He said extremism stood for escapism. But the Dolls and the Stooges were never about escape. They wanted to rub your nose in reality, and draw blood while they did it. It’s not like you’re ever going to descend to that confrontational gut level in fashion, but you could wish for some of their energy if a designer is going to invoke such totems. Van Noten is innately too polite for such a challenge. He’s witty. No problems there. His idea of a sports element was the glitzy, metallic look of Mexican wrestlers. But a more lingering impression would be Leon Dame in purple velvet, swathed in fox furs, like a young King Ludwig (Helmut Berger again) in Luchino Visconti’s 1973 biopic. There was also the usual plethora of solid, sellable tailoring.

Van Noten seemed keen to establish a connection between his summer show and this one. The same model opened both, hair a little longer here because time has passed, but the same laser cheekbones, the same hauteur, the same clashing grab-bag style. Such continuity isn’t typical of the designer’s career. That begged the obvious question: why now? Even as you asked it, you knew the answer: why not?