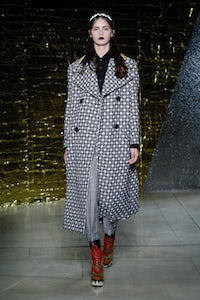 PARIS, France — The space for the Miu Miu show was configured in monumental structures, pierced with arches. “Nowhere in particular,” Miuccia Prada insisted. Then she mentioned Derek Jarman’s sets for Ken Russell’s The Devils. How easy it was to draw a line between the extremes of that celluloid experience, which transfigured all who encountered it in the early 1970s, and the sensational aspects of her new collection for Miu Miu. Not necessarily in the substance of the film itself — the auto-hysteria of 17th century witch trials in France — but in the audiences which turned out in 1971 for its extravagant, perversely glamorous psychosexual overload. Those were extreme times, these are extreme times. And Miuccia Prada extracted that essence from one era to cater to another.

“One Step Beyond”, a Madness hit that capped the 1970s, was our aural cue. And so we took that step, to clothes that evoked a fabulous fusion of glam and punk and Goth: glitter zigzags on platform soles, secretarial strictness swathed in nylon fetish-wear, prints of candlesticks and cigarette lighters, then-and-now ways to fire up a cancer stick. And now, as then, the 1940s/1970s were an umbrella for lean tailoring, huge coats, pinafore frills, jewellery, stoles and those amazing shoes. The way, for instance, that Miuccia revisioned a diamond-patterned leather jacket  from retro to covet was a textbook illustration of her ability to shift perceptions.

The collection was true to the Miu Miu vibe in that it felt like a hundred ways to make bad behavior look good. You can’t go wrong with a turquoise stole. That, in its own Prada-ish way, also felt like a logical response to an illogical world. Playing by the rules got no one anywhere. 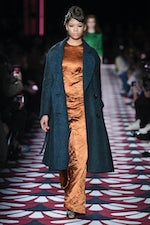 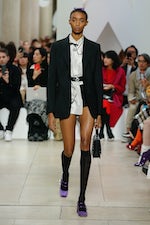 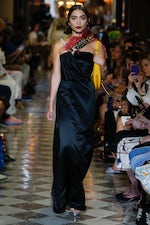 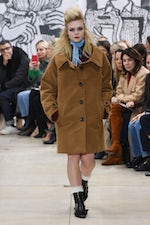