At New York Men’s Shows, Strangers In a Strange Land

Beneath the surface of sporty jackets and graphic t-shirts, one could glimpse the anxieties of a generation, alongside those of New York’s menswear week itself.

At New York Men’s Shows, Strangers In a Strange Land

Beneath the surface of sporty jackets and graphic t-shirts, one could glimpse the anxieties of a generation, alongside those of New York’s menswear week itself.

NEW YORK, United States — The suit is dead. So is the dress shoe. Skinny pants, too, jeans or otherwise. Run out and buy yourself a pair of slouchy, side-striped track pants though, and maybe an anorak. Those were just some of the big takeaways from the runways of New York Fashion Week: Men’s, the three-day event that ended on Thursday night.

But look beneath the surface — and, yes, there’s a lot of it — and you may just glimpse the anxieties of a generation, humming ominously like white noise beneath the sporty jackets and graphic T-shirts seen in so many of the collections. As the United States — or the world, really — adjusts to a new, uneasy sense of normal, every industry is finding itself in flux. Fashion has always been concerned with identity and realisation, but what does that mean in these fractured times?

With American designers like Ralph Lauren, John Elliott, Phillip Lim and Thom Browne showing in Europe, and a Belgian — Raf Simons — in charge of one of this country’s biggest brands — Calvin Klein — what exactly does it mean to be a “New York” designer and show at its fashion week? The idea of American citizenship has taken on deeper, more tortured meanings in the Trump era, and those concerns are starting to materialise in unexpected ways, even in the fashion world. After all, New York has always been a promised land to immigrants, and that feeling underscored the shows taking place here for the Spring 2018 season.

Fashion has always been concerned with identity and realisation, but what does that mean in these fractured times?

Take Nigerian-born New York-based designer Taofeek Abijako’s presentation for his brand Head of State, which took place at New York Men’s Day, an amuse bouche of presentations from upstart labels that precedes the official fashion week. Based on images from African photographers Malick Sidibé and Seydou Keita, Abijako presented a collection that had a surprising sophistication, considering he’s a mere 19 and self-taught. “This is me digging through my cultural upbringing and then relating that to my assimilation,” he said of his track jackets and cargo vests in dandelion yellow or cherry red, which were youthful but formal. Abijako may be young, but he already sells at United Arrows in Japan and said many retailers were interested in this season.

Also of note was Bristol, designed by Los Angeles-based Luke Tadashi, and inspired by basketball and hip-hop magazines of his youth like, Slam. “Flipping through the pages as a young kid you get this vibe, this attitude,” he said. “It’s raw, its authentic. These guys don’t give a fuck, they’re just themselves.” That swaggering attitude came across in his wide-leg corduroy pants, baggy denim, and half-zip mock neck tops — '90s throwbacks that had an appealing freedom. “I was sort of doubting the path that I’d chosen,” he said. “So this collection was me trying to remind myself why I love it.” The results were nostalgic but hardly cloying. Though, it should be noted, it would benefit designers, who espouse uniqueness but are oftentimes victims of groupthink, to move beyond the '90s sportswear references — it’s deeply saturated the marketplace and is already looking tired.

It's nice, however, to talk to the younger designers. The older generation is able to effortlessly stay on message, like politicians, delivering their platitudes about seasonal inspirations with the requisite breezy manner and winning smile. The new guard is distracted and fidgety, all "hmmms" and "uhhhs". It's adorable. 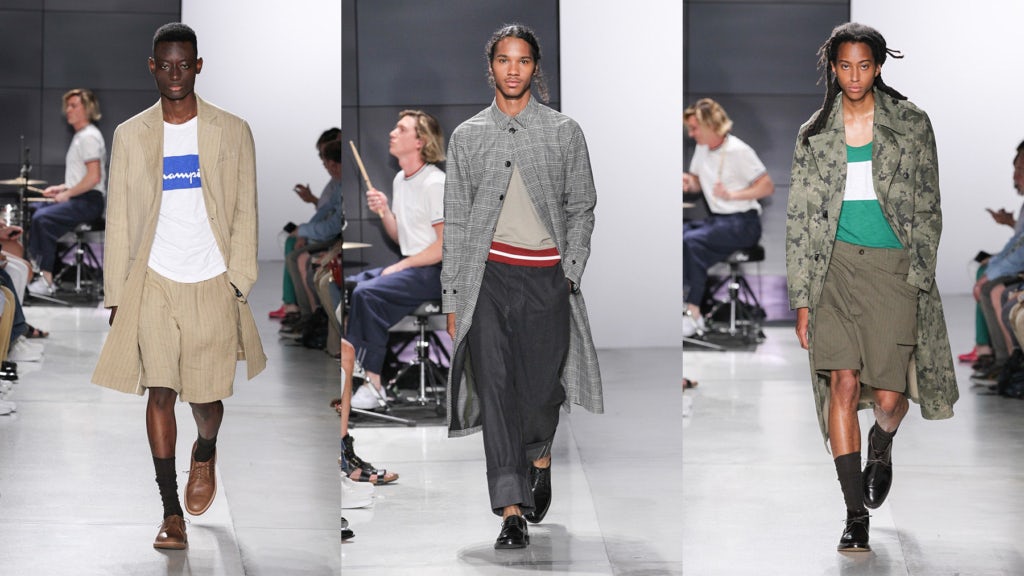 Then contrast that nervous energy with the supreme confidence of someone like, say, Todd Snyder, who was acquired last year by American Eagle Outfitters and opened his own men’s flagship in the city. While on some levels the show was a retreading of his greatest hits — the slim bombers, the genial shirting, the classic outerwear — Mr Snyder knows how to tweak them just so to create the veneer or newness and desirability.

“New York is the coolest city on the planet. I don't know why more American menswear designers aren't showing here,” he said, a throwing of the gauntlet, perhaps. “In the meantime, I will keep showing in New York.” Even Snyder has been persuaded to loosen up his tidy tailoring a bit this season, as he opened with a series of voluminous, deeply cuffed jeans and chinos. “I was walking around Pitti Uomo this season and I was very bored with the way men are looking,” he said. “I wanted to make a bold change. This season it was about proportions.” The results added a welcome hit of freshness to the collection. But, of course, the question is will Snyder’s customer buy it? 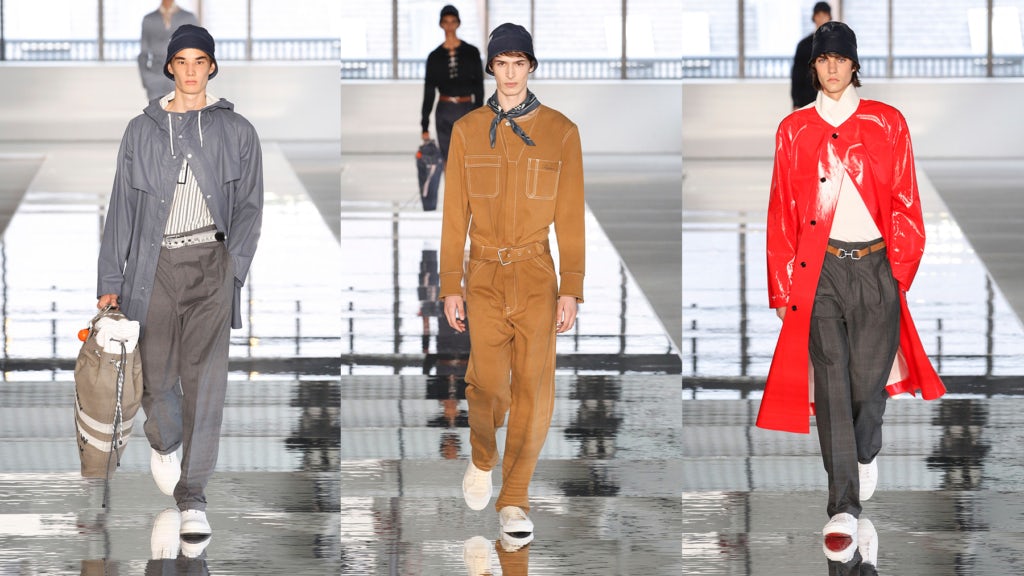 You know the suit is dead if Hugo Boss, the German brand known for its strict tailoring, goes full nautical sportswear, which it did. While there were strong hints of Louis Vuitton’s signature wanderlust contained within, it was a handsome, easily digestible collection filled with laced-up cagoules and Henleys, louche pleated pants, and airy outerwear in shades of bone and grey — though it’s hard to say how much will ever actually make it to the sales floor. Hugo Boss’ struggle with identity is internal, for now at least, as the company tries to clearly define itself in the rocky market place (Is it luxury? Is it contemporary? etc) as a new chief executive sets forth a new path for the brand.

Raf Simons’ "Blade Runner"-inspired show, set in a Chinatown market under the Manhattan Bridge, was the week’s crowning spectacle. The collection — which took Asian influences and lent them a sense of post-apocalyptic futurism — featured cocooning coats with dropped shoulders and an ungainly attitude. Simons isn’t afraid to make garments that look ugly or strange for the sake of conveying an idea or emotion. 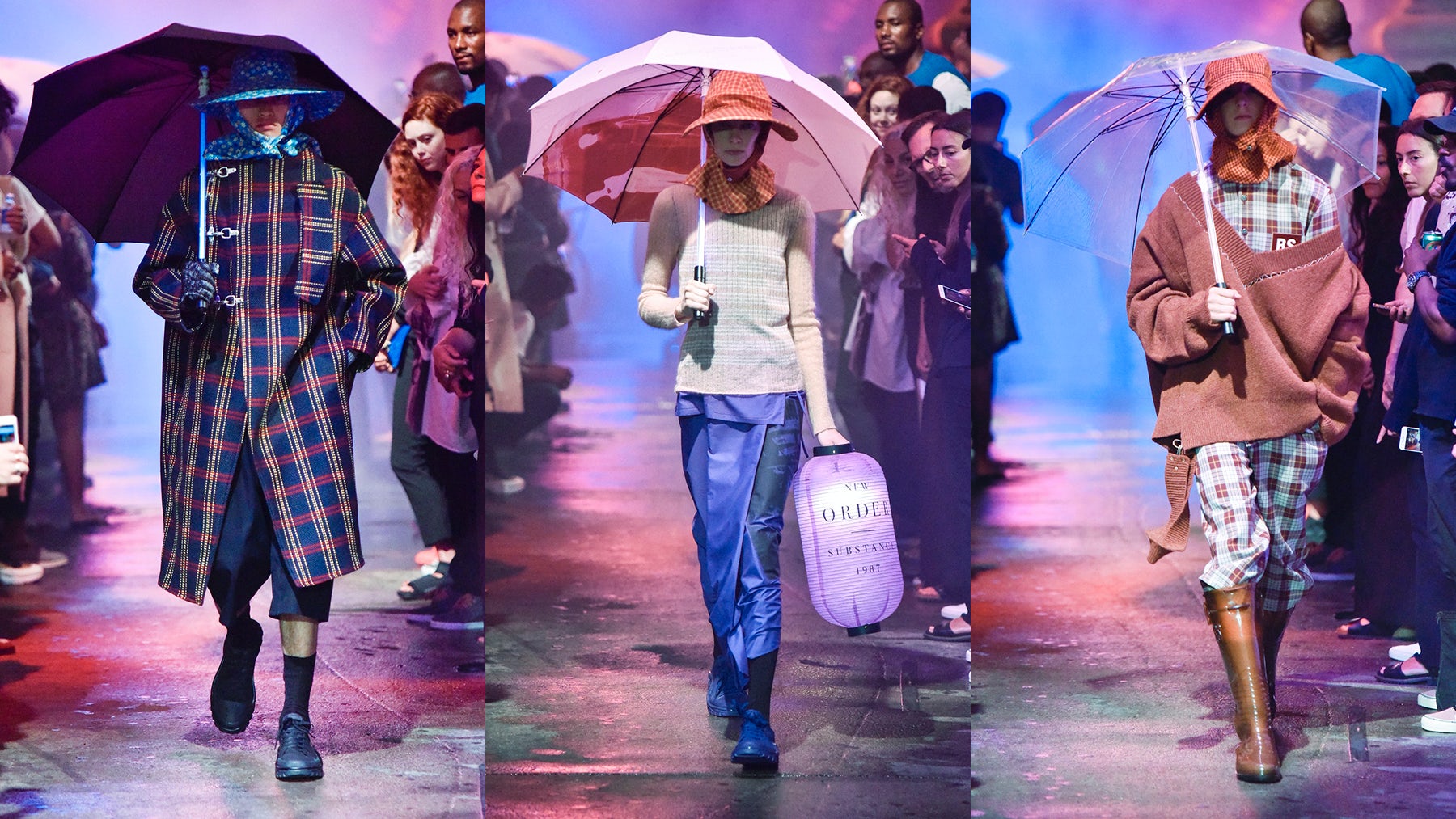 Simons admitted that this cultural overlap may have been the result of the current political climate. “There’s not always a direct political reference,” he said backstage, “but it goes through you. I moved from Europe to here and things changed, and how do we deal with that? I think it’s important for someone with my job to inspire, to make people feel positive about what they see.” Still, the lush world he summonsed, so achingly alive, certainly had dark edges.

Patrik Ervell is a West Coast transplant, and this season he presented a collection based on his teenage years in Northern California: '90s colour-blocked windbreakers worn with knee-length leather shorts and clunky sneaker-boots. “I was interested in a period when we were excited about the future,” he said backstage. “To me, San Francisco in the '90s was that place, like we were inventing the future. It was vital and exciting.” Ervell smartly made many iterations of his eye-catching lightweight jackets, which seemed like they could be commercial winners when next summer hits and guys start looking for a distinctive, fun layer. 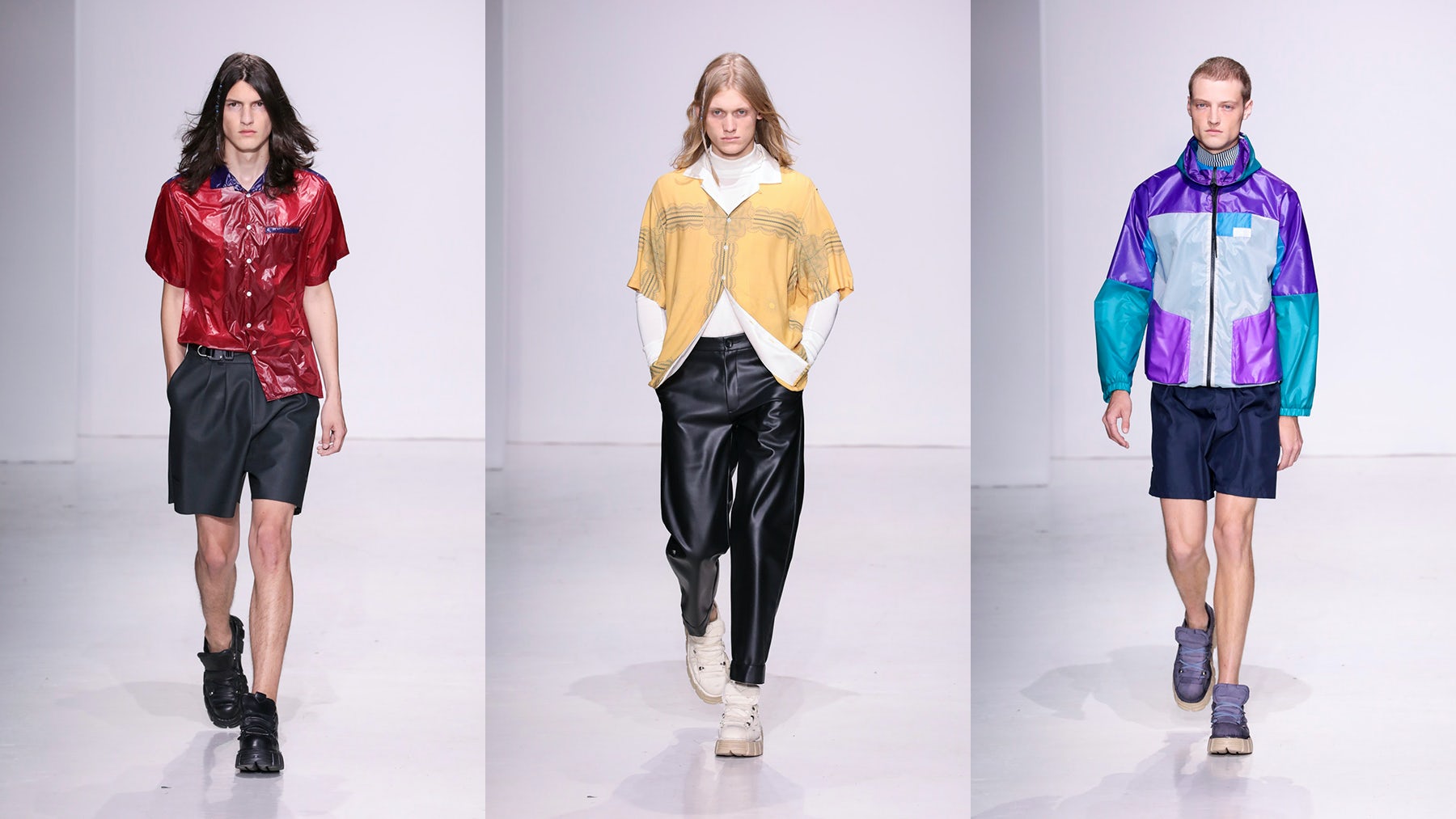 Willy Chavarria showed his collection at the gay leather bar The Eagle and titled it "Cruising," in case subtly isn’t your thing. Luckily, his offering of high-waisted, wide-leg pants, voluminous shirting and athletic pieces featuring a playful appropriation of the “Coors” beer logo — inspired by California Lowriders and the New York leather bar scene — was done with just the right mix of humour and wit. The idea of hyper masculinity, whether done in earnest by Chicano auto enthusiast or as a performative part of queer culture — made for a surprisingly handsome collection with just a bit of sexual heat. Chavarria is a designer to keep an eye on.

There were some disappointments, though. Deveaux designers Matt Breen, Patrick Doss and Andrea Tsao proposed “another unique take on minimalism,” according to the show notes. But minimalism requires even more rigor than other aesthetic canons and they failed to demonstrate how their clothes were considered. Instead they were bland, lacking the tension and thoughtfulness required to make simplicity look interesting.

It’s unclear who Perry Ellis is aiming to please these days, and if you don’t have a strong point of view of who your customer is, then what do you have? The huge pants, hanging belts (shades of Off-White) and streetwear-meets-sport jackets in bright primary colors didn’t add up to much. Ellis, the man, was known for his wit, and that’s what has been lacking at the brand lately.

Of course, there’s another, bigger question underlying the whole proceedings, and that’s the relative health and success of New York Fashion Week: Men’s, which is in its fifth season. Rumours have swirled that this is the last one and that after having difficulties securing sponsors and willing participants, but Steven Kolb, chief executive of the CFDA, ensures that it will be back next season and Cadillac, this season’s main sponsor, confirmed that it, too, will be back in the same capacity.

While the concept of fashion week as a whole is becoming destabilised, embracing fluidity and change is the best approach for now.

“I think we’ve been unfairly covered, somewhat,” Kolb said earlier in the week. “A lot of it is fake news,” he added, cheekily referring to President Trump’s rallying cry against the media. “Some of the coverage has been like, ‘Oh it’s so irrelevant, nobody likes it, it’s going to die.’ You know, we just keep our heads up and move forward. That’s been a little disheartening. At the CFDA we have a lot to do, taking on and creating a men’s Fashion Week, we did it because the editors wanted it, the buyers wanted it, and the American designers wanted it. We’ll continue to do it for as long as they want it.”

Kolb notes that while the concept of fashion week as a whole is becoming destabilised — where to show, how to show, what season to show and when — embracing fluidity and change is the best approach for now. And while local designers appear to be fleeing their home country of late, he notes that the American wholesale business far exceeds that of Europe and that America is a crucial commercial market for both big businesses and brands looking to grow. As they say: follow the money.

That was a good reminder that business, not selfies, is the true underlying cause of events like this, despite all the product tie-ins and branding opportunities. You may see the hash-tagged Instagram posts from influencers, but behind-the-scenes brands are looking to sell their wares. It says something that many showgoers seemed happy to be present, but you saw much more Gucci in the crowd than, say, a design by a local. Yes, fashion week is a key opportunity for labels to define themselves, to really look at what they stand for and how best to communicate that message — but at the end of the day, commerce and the exchange of money is its life force.

And, really, what’s more American than that?