New York’s Chinatown Is Bubbling With Creativity. But For How Long?

The still-gritty but fast-gentrifying Manhattan neighborhood is host to some of the city’s most interesting emerging fashion labels.

New York’s Chinatown Is Bubbling With Creativity. But For How Long?

The still-gritty but fast-gentrifying Manhattan neighborhood is host to some of the city’s most interesting emerging fashion labels.

NEW YORK, United States — There have always been artists and designers based in Chinatown, one of the only neighborhoods of Manhattan that has yet to be spoilt by profit-seeking property developers. But as the area's restaurants become nationally recognised and vintage stores stocked with 90s-era Helmut Lang earn thousand-word write-ups in the New York Times, there is a twinge of fear amongst the locals that their little slice of realness is endangered.

What happens next, no one really wants to think about. Right now, though, a large slice of the city’s most interesting designers are part of this community. Vaquera, a trio of thoughtful kids who are sharp with their storytelling, showed their latest collection in a public school cafeteria, scrunched up paper artfully scattered around the floor, a recording of kids reciting the pledge of allegiance serving as background noise. 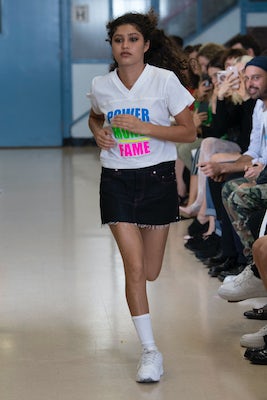 Backstage, Patric DiCaprio, Bryn Taubensee and Claire Sully — Vaquera’s fourth member, David Moses, has left the collective — were clear about their intentions. This collection was about high school, and the surges of "hope and fear" that narrate that experience. It was all there, so clearly, in the grey jock sweatpants, cut into a trapeze gown and worn by a model carrying silver pom-poms, her lips darkly lined. It was there in the exaggerated Laura Ashley gowns, in the referee whistles mangled into a crop top. They mentioned that the fashion industry is a lot like high school. But right now, Vaquera are the cool kids.

As for whether they can build a business, they say they want to, and that they carefully planned this collection in three tiers of product — the commercial, the conceptual and the avant garde. But it’s not yet convincing enough. Eckhaus Latta, another label that operates in and around Chinatown, has a clear commercial path. Here’s to hoping Vaquera can achieve the same — without rushing things. They mentioned that they like to use “gross” fabrics, mostly deadstock, and that cheapness is part of the story. There is a sort of base beauty to what they're doing. (The casting was also spot on, and especially entertaining to members of the press startled by the sight of New York Times Styles reporter Matthew Schneier stomping deliberately down the runway.) 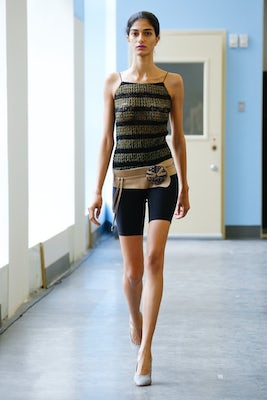 The designs of Maryam Nassir Zadeh, whose orbit goes through Chinatown, also explores the grotesque. But she is quite glamorous, and those two ideas — coloured tights layered under sheer garments; teal shorts paired with a grey suit jacket — reflect the way a certain kind of woman dresses today; elegance and tackiness are not mutually exclusive.

Nassir Zadeh, who opened her boutique on the Lower East Side a decade ago, is more influential than many realize, not only in the way she stocks the store with labels like Priscavera, Visvim and Cristaseya, but also because of her namesake shoe collection, which is heavily influenced by the 1980s and has inspired myriad knockoffs. (The season's black pump, covered in neon squiggles, will likely be the next victim.) She is already stocked in major stores like Matches Fashion, but it will be interesting to see how far Nassir Zadeh can take things, and how far she wants to go. There is a culture to preserve here, after all.