The designer's minimalist chic has evolved to a point where it is utterly seductive in its confidence. 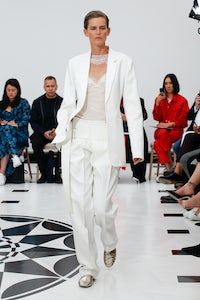 The designer's minimalist chic has evolved to a point where it is utterly seductive in its confidence.

LONDON, United Kingdom — Victoria Beckham was thrilled that Stella Tennant was the first model on her catwalk on Sunday morning. They’re both women in their 40s, both with four kids. “She’s everything a woman should be,” Beckham enthused. Which made Tennant, in this particular instance, the ideal incarnation of Beckham’s 10th anniversary, not only for the common ground, but also because she is the quintessential British model at the watershed moment when Victoria brings her show back home to London after a decade in New York.

Maybe that’s not strictly true — Edie Campbell was in the show too — but when Tennant stepped out in her opening look (white pantsuit over lace-trimmed camisole, anchored by flat silver booties), she clarified just how much the minimalist chic that defines, with varying success, Beckham’s ethos over the last decade has evolved to a point where it is utterly seductive in its confidence, especially for those who remember the hesitance and naïvete of her early presentations in New York. Then, she was eager to please. Now, there was no need. The clothes spoke for themselves. And they were bold, in the volume of a long, shirred dress, in a sinuous off-shoulder tube, in a trapezoid swathe of fabric suspended from delicate spaghetti straps.

There were hints of the past here and there, in the scarf point dresses over narrow pants, for instance, but Beckham insisted the anniversary collection wasn’t a retrospective. She was right. There was no sense of a stopgap, the colour palette offering backup there. Beckham is a bit of an art buff. She even has a list of artists with whom she fancies collaborating. Nicola Tyson was the name that came up on Sunday. The designer said the whacks of vermilion in the show were Tyson-inspired. They were a very necessary — and therefore clever — accent.

The intimacy of Thaddeus Ropac’s gallery (conveniently located next door to Beckham’s boutique on Dover Street) provided a focus on the clothes that seemed significant in the light of the appointment of a new chief executive and a new team who will re-focus the business. I would have worried about that once, but Beckham gave everyone a whole lot to work with here. Michel Gaubert had Soul II Soul singing “Back to life, back to reality” on the soundtrack. There was all that and more on the catwalk.