Stuart Vevers, with his outsider’s sensibility, infused the new collection with his love of Keith Haring; the takeaway was an upbeat celebration of youth and beauty. 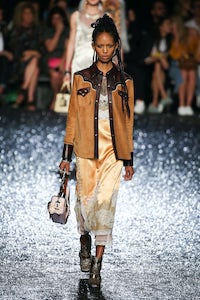 Stuart Vevers, with his outsider’s sensibility, infused the new collection with his love of Keith Haring; the takeaway was an upbeat celebration of youth and beauty.

NEW YORK, United States — Someone somewhere must be feeling like New York City needs a hug, because all week long, designers have been talking about “love letters”. The latest was Stuart Vevers, who, during his nocturnal walks home from rehearsals for the new Coach show on the very Lower East Side, was overwhelmed by how strange and magical the city can seem at night. With the help of set designer/magician Stefan Beckman, he wrapped his new collection in glittering darkness, complete with a sparkling Buick whose taillights gleamed dull, evil red, like the possessed "Christine".

Not the first echo of Stephen King this week, and, just as Raf Simons did at Calvin Klein, Vevers seemed to be probing the dark flip-side of the American dream. It was almost as though he had taken the all-American prairie girl who has been the pin-up of the Coach renaissance and made her walk to the Mudd Club on White Street at four in the morning in late ‘81 with the Bush Tetras’ "Too Many Freaks" ringing in her ears. That was, in fact, almost the inspiration for the collection. Vevers started designing with an image in his mind of actress Hari Nef showing up at a Coach party in a long prairie dress which she quickly discarded to spend the rest of the night in her slip.

So it was an irresistible Steve Mackey/John Gosling no-wave soundtrack of Bush Tetras and ESG and Suicide, and a Beckman backdrop of the Lower East Side, and the magpie mood of the Mudd in the clothes. The sense of re-purposed vintage was strong in patchworked denims and embroidered shearlings, in a lace-trimmed slipdress worn with a suede cowboy jacket or college cardigan for the girls, or a satin souvenir jacket over a Western/Hawaiian shirt for the boys. At the Mudd, kids dressed to subvert Americana, their personal style a badge of resistance to the prevailing conservative ethos of the Reagan years. Gothic Hawaiian? What a perfect way to cloud Republican sunshine.

Vevers, with his outsider’s sensibility, infused the new Coach collection with his love of Keith Haring, who was one of the great artistic refuseniks of those years. Haring’s joyfully iconic forms – the radiant baby, the barking dog, the flying saucer - were liberally sprinkled throughout. But, balancing the playfulness, there was the inevitable tristesse that attached itself to that particular time in New York, with so many brilliant young people gone much too soon. “What would Keith Haring be doing today?” Vevers wondered.

Curiously, the same sort of question is being asked a lot in London at the moment, with a huge Basquiat retrospective just opened, and a show at Studio Voltaire dedicated to the last works of Cookie Mueller and her husband Vittorio Scarpati, both dead of AIDS in 1989. Vevers closed his show with screaming sirens and Lou Reed intoning "Vicious". That sounds downbeat. But the takeaway really was an upbeat celebration of youth and beauty and please-yourself-however-much-anyone-else-tries-to-rain-on-your-parade. Honest, it was!