The clothes had an airiness, a freshness and an uncontrived nonchalance that he infused with a yearning for freedom. 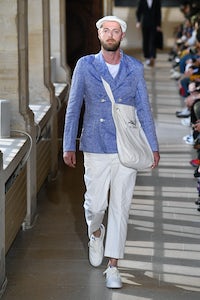 The clothes had an airiness, a freshness and an uncontrived nonchalance that he infused with a yearning for freedom.

PARIS, France — Junya Watanabe’s collection was as plain as the brown paper on which his invitation was printed. So why was it so irresistible? Because it gave off the seductive sense of a man who could let the cares of the world go, who could take time for his magazine, or his drink, or a long lunch at a favourite restaurant, who could be here now. Watanabe called him “a nowhere man,” someone who is “free and doesn’t belong to anywhere in particular.” He said he longed for such freedom himself. Maybe the collection was irresistible because he'd infused it with that yearning.

Watanabe tagged the trappings of a considerate life lived well through the canvas shopping sacks the models carried. Each of them was branded: St John’s Restaurant in London, Fiskerikajen fishmongers in Copenhagen, Dobri Home-Brewed Pale Ales, Civilisation Newspaper from New York, and so on. The soundtrack featured birdsong, a banjo and fiddle. Add the models’ beards, and we were dangerously close to full Mumford, except the clothes had an airiness, a freshness, an uncontrived nonchalance. It wasn’t as though we haven’t seen this from Watanabe before. All his signatures were here: the casually elegant tailoring, the patchwork, the top-stitching, the subtle trompe l’oeil (a jean jacket front on a poplin shirt, a field jacket fronting a coat), the chinos, the baggy shorts, the mutant Americana… intelligent, beautifully crafted clothes, like a glass of cool, clear water on a greasy, humid summer’s day. Sometimes, that is all you want. This was one of those times.