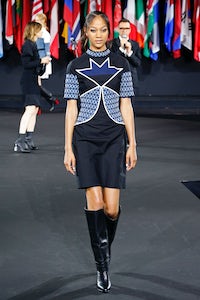 NEW YORK, United States — A couple of years back, in lieu of a runway show, Opening Ceremony’s Carol Lim and Humberto Leon staged a play at Lincoln Center, which starred the likes of Catherine Keener and Elle Fanning. The plot was forgettable, but the experience was wholly satisfying, not only because it was an interesting and effective way to exhibit the clothes, but also because it took the fashion-show-as-experience in a different, more compelling direction.

This season, the designers layered another performance with politics, enlisting Portlandia’s Carrie Brownstein and Fred Armisen to host the “Pageant of the People.” The 30-minute production interspersed actually funny banter with models walking in the brand’s latest collection of colour-blocked loafers, ruffled-hem kick flares and ribbed-knit maxi dresses, as well as speeches from a lineup of 11 female “contestants”, including Whoopi Goldberg, Saturday Night Live star Aidy Bryant, and LGBT activist Sarah McBride. They addressed everything from the global refugee crisis to importance of voting in the forthcoming election.

“You should vote because if you don’t vote, you can’t bitch,” Goldberg quipped. And indeed, Rock the Vote made it possible for anyone (eligible) in attendance to register to vote on the premises.

Before the show, Lim and Leon, both children of immigrants, said that they were compelled to speak up this election season. We thought a lot about the journey our parents had coming to America, and we thought a lot about what it means to be American in general,” Leon said. “We grew up thinking, ‘We’re super proud Americans,’ and we still are, but we have a lot of questions, and we brought that into this collection.”

So yes, this was certainly more about the message than the clothes, but the collection — which they’re calling “America, the Journey” — did stand on its own. So well, in fact, that a good chunk of what walked the runway was available to pre-order immediately, set to be delivered as early as two weeks from now. “We’ve been working on reorganising our calendar for the past 18 months,” Lim explained. “We also have stores, so we know exactly what sells.”