"Only You" Moyet Sings for Bailey at Burberry

Since becoming chief executive at Burberry, Christopher Bailey has taken the business in idiosyncratic new directions, giving the brand an arty little kick. 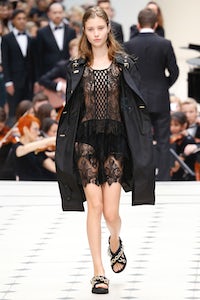 "Only You" Moyet Sings for Bailey at Burberry

Since becoming chief executive at Burberry, Christopher Bailey has taken the business in idiosyncratic new directions, giving the brand an arty little kick.

LONDON, United Kingdom — “Alison Moyet was my first crush.” Christopher Bailey was buzzing after his show on Monday afternoon. “I was obsessed with her when I was a teenager.” And, here she was, at the end of Burberry’s presentation, singing Only You to only him. “Still my hashtag crush,” he gushed. That’s what being chief executive of one of the worlds most successful fashion businesses gets you.

What it also lets you do is take that business in idiosyncratic new directions. Since he became top dog, Bailey has given Burberry an arty little kick. Monday’s story was like something from a movie where a girl runs into the storm in her nightie after a big fight with her soldier boyfriend, grabbing his coat from the kitchen as she heads out into the darkness. In other words, it was a very cinematic juxtaposition of silky femininity and military butchness.

Bailey had a way to reconcile such an old-fashioned bodice-ripping image with Burberry’s status as fashion’s consummate digital pioneer. “Social media recognises no boundaries, no seasons,” he said. “This is a mixing of different worlds, high and low, evening and day.” The long silk dress with the sandals? “That’s the way people are dressing.”

Still, it looked a little odd for Burberry. Using the military company that does all the metal work for the regalia of the Queen’s Guard, Bailey had pieces made that trimmed classic Burberry items — capes, trench coats — in gold braid or decorated them in bullion. They were paired with little lace shifts or long floaty silk dresses, literally evening attire, as in something a lady might wear to bed. The night before the show, everything was Snapchatted, in keeping with the company’s commitment to new channels of communication. Bailey said it looked “street” in this context. But, even when it hit the catwalk, the Swarovksi-crystalled tie-dye couldn’t help but err on the side of shazam.

Cynics might say the show was pushing backpacks, like the ponchos or massive wraps of seasons past. Fie on that! There is showy drama in Burberry now. “It all comes from me,” Bailey enthusiastically declared backstage. Oh my God, what next? 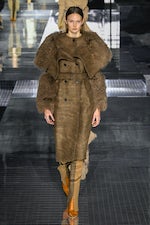 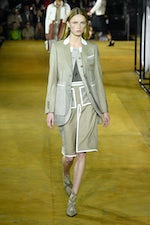 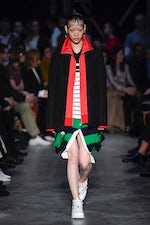 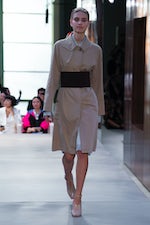