Few of Carol Lim and Humberto Leon’s attempts to turn their seasonal presentations into experiences have been as successful as their latest theatrical production Changers. 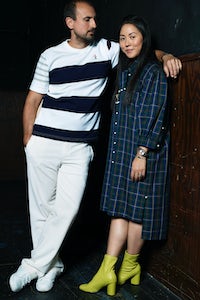 Few of Carol Lim and Humberto Leon’s attempts to turn their seasonal presentations into experiences have been as successful as their latest theatrical production Changers.

NEW YORK, United States — Carol Lim and Humberto Leon's shows for Opening Ceremony have never been about the clothes alone. There has always been a theatrical element to the proceedings, whether that was a wall dripping with chocolate syrup or inflatable hovercrafts floating above the runway.

Their most ambitious presentations, however, haven’t felt like fashion shows at all, ranging from a celebrity “beauty” pageant where contestants dove deep on hot-button global issues to a Justin Peck-choreographed performance at the New York City ballet. More often than not, their partner in creative crime has been the director Spike Jonze, with whom they staged a powerful play for Spring 2015.

In fact, one could argue that the best fashion show Lim and Leon have ever put on was Jonze's film 'Her', for which the duo collaborated with the movie's costume designer and developed a capsule collection sold at retail.

Not every one of Lim and Leon’s attempts to turn their presentations into theatrical experiences has been as successful. But on Sunday at La MaMa Experimental Theatre Club, they hit on a good thing, teaming up with Jonze once again — as well as the choreographer Ryan Heffington — to create Changers, a story about relationships, both romantic and platonic, told through dance. The cast, clad in the brand’s Pre-Spring 2018 collection — available to pre-order for October — was led by the immensely talented actors Mia Wasikowska and Lakeith Stanfield, whose incredible chemistry was perhaps best expressed through body language — and a perfect soundtrack that included LCD Soundsystem’s "Dance Yourself Clean."

Wasikowska and Stanfield used their wardrobes as a props — her cropped ribbed neon sweater flapping around to reveal a top-stitched, pinstriped bra top, him almost sinking into his orange-speckled crewneck jumper as the couple’s relationship disintegrated — in an utterly convincing way. Her pink blazer in the final scene, decorated with pearl buttons, had a very specific mix of youth and maturity, which sort of zeroes in on who the Opening Ceremony customer tends to be: a woman on the verge.

Perhaps the greatest thing about Sunday’s performance is that it wasn’t simply a fleeting presentation for the industry. Lim and Leon have booked the space for four more nights — and they sold about 2,000 tickets at $15 a pop, with the proceeds benefiting the Greater Houston Community Foundation’s Hurricane Harvey Relief Fund.