The trio behind Orley reflect on their shared heritage. 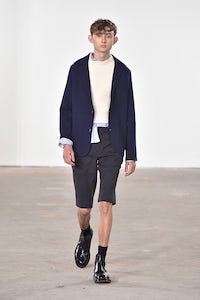 The trio behind Orley reflect on their shared heritage.

NEW YORK, United States — Heritage is something that is earned. It can’t be manufactured. Perhaps that’s why Orley, the knitwear-first collection started a couple of years back by brothers Alex and Matthew Orley and Matthew’s wife, Samantha, felt fully formed from the get go. Their brand might not have a heritage, but their family does. This season, for their first runway show, the trio started with a wartime photo of Alex and Matthew’s grandparents, who were stationed in the South Pacific during their engagement. “Our guy has always been soft. Matthew and I are very averse to any type of machismo,” Alex said backstage after the show. “We want to be an American brand, but stripped of that kind of vulgar macho-ness. This season, we thought, how can we have our soft guy and have him be strong at the same time? So we looked to our grandfather.”

The wonkiness that charmed in Orley’s earlier collections was subtler here. Hand-knit maritime sweaters were deconstructed — the stripes displaced and threads hanging long and loose. Along with well-loved standards like the knit polo, tucked oh-so-specifically into a pair of extra-velvety corduroy pants, new propositions included a few softly tailored double-faced wool blazers, which had enough structure to not make men look doughy. Many of the pieces were worn by both men and women on the runway — including a knitted sweater with a hem moulded into a wave. Its ruffled cuffs will likely appeal more to ladies, which are quickly becoming the crux the company’s business. For her specifically, they created two-tone pleated skirts and a sky-blue shearling mohair bomber bonded to a technical knit for definition.

There’s something wonderfully off about what the Orleys do: the colours, the silhouettes, the ideas. Their look is old and young at once, and the dichotomy gives the collection a little bit of magic. While they’re still learning — the proportions aren’t always right and the styling is too considered — it’s nice to see something on a runway that doesn’t look quite like anything else. Do we have another knitwear dynasty on our hands? The seeds for it certainly have been planted.