The studio at Oscar de la Renta did the brand credit with their presentation on Monday. 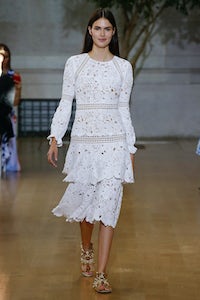 The studio at Oscar de la Renta did the brand credit with their presentation on Monday.

NEW YORK, United States —As thankless as it must surely be to anonymously plug the gap between departures and arrivals in fashion’s ongoing game of musical chairs, the studio at Oscar de la Renta did the brand credit with their presentation on Monday.

De la Renta’s facility with a glamorous, polished ease belied his years. His last collections bridged decades (undoubtedly with the aid of Laura Kim and Fernando Garcia, who have recently taken over the creative directorship of the label from Peter Copping), and it was that same timeless quirk that made Monday’s show so appealing.

Long white lace dresses with flat sandals spoke of leisurely summer nights at Casa de Campo, Oscar’s retreat in his native Dominican Republic. Even better — a simple, strapless column of ivory crepe. A gilded pin-tucked gown and pleated lame skirt were fancier, but no less demanding. The more structured pieces — for example, a ruffled, strapless situation in red silk faille — didn’t fare as well. The tomtom throb of Fleetwood Mac’s Tusk set the mood. This was a collection for letting go, not for trussing up. After all, what have you got to lose when there’s a new sheriff in town next week? The studio looked fulfilled when they took their bow en masse.