The collection’s 133-look breadth, so weighted with canny commercial considerations, was simultaneously its strength and weakness. 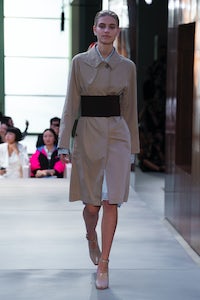 The collection’s 133-look breadth, so weighted with canny commercial considerations, was simultaneously its strength and weakness.

LONDON, United Kingdom — As the roof rolled back on the massive South London Mail Centre, the sunlight poured in. Even the heavens agreed there was a new day dawning at Burberry. All those years of ardent Catholicism at Givenchy have clearly paid off for Riccardo Tisci. Now he has God in his pocket. But when he called his Burberry debut “Kingdom,” it wasn’t Heaven he was talking about. Tisci was effusive when he spoke of the Queen. His show invitation was the kind of copperplate production you might expect from a summons to Buckingham Palace. Tisci insisted his collection was a celebration of all things bright, beautiful and British, from crowned head to commoner.

The second-most-anticipated show of the Spring season was certainly that: all things. “Building a wardrobe under the umbrella of Burberry for mother and daughter, father and son,” was how Tisci described it. “That’s what fashion should be, every age, every culture, every lifestyle." If Robert Del Naja’s masterful soundtrack, revising 90s classics from his band Massive Attack, had died away for a minute, you’d surely have heard Burberry’s brand merchandisers dancing a gleeful jig.

That 133-look breadth — I hesitate to call it vision because it was so weighted with canny commercial considerations — was simultaneously the collection’s strength and weakness. The show opened with a passage defined in the accompanying notes as “refined,” where Tisci addressed the brand icons, the beige trench and the check. He cinched one coat with a version of the gigantic elastic belt that Thomas Burberry used in its original military incarnation (remember the trenches of WWI?). He lavished crocodile on the storm flaps of another, and inset silk scarves that fluttered down the side-seams of the next (that was an instant winner).

Then Tisci turned the check into a horizontal stripe and cut it into a pussybow blouse. Or he wove it into a tweed for a proper coat. Propriety was key. There were more pussybows. There were floaty knife-pleated skirts matched to precise knits, and some business-minded blazers. But propriety has always been something infinitely worth subverting for Tisci. So he showed leather pencil skirts, and a tailored three-piece pantsuit on Freja Beha Erichsen that married Savile Row tradition to a hint of maitresse-y transgression. On a couple of outfits, the waist seam was detaching, things coming apart at the seams. We’re not so proper after all, are we?

This was the most successful stretch of the show, practically a collection in itself, where Tisci felt fully engaged. What followed was his “refined” menswear which also, predictably, drew on Savile Row, with its pinstripes, grey flannel and camel. The styling details — sweaters over suit jacket, padlocked chain embellishments, pant stripes matching striped shoes — couldn’t distract from a fundamental anonymity.

Then came a torrent of “young” Burberry, a distillation, said Tisci, of his impressions when he first moved to London as a wide-eyed 17-year-old in the early 1990s, “a new generation wearing the clothes of their parents, mixing oversize with vintage, a look which used to be punk.” There was a lot — too much: photoprints, cropped this, caped that, blaring branding and streetwear tropes galore, a reminder that Tisci was one of the first designers to fuse low and high. “Why did they kill Bambi” was the plaintive plea (minus question mark) on a doe-printed shirt.

The track “Who Killed Bambi?” was a particular nadir of the Sex Pistols’ decline and fall, but Bambi was also a star in Tisci’s own graphic pantheon. That slightly clumsy integration of punk and personal mythology said a lot about this particular part of the evening’s entertainment. But seeing that Tisci is one of those designers who galvanises a fervent cult of personality, it will probably go bang.

But then there came the actual eveningwear, seven columns of black jersey that felt like an after-thought. Under Christopher Bailey, Burberry had no interest in the kind of tortured glamour that Tisci perfected in his couture collections for Givenchy. In keeping it as straightforward-shading-banal as he did here, Tisci was playing his cards close to his chest.

There was, in fact, a sense of that throughout the whole show. In bringing in Peter Savile to fix the logo, in hiring Robert Del Naja for the soundtrack, he was taking on board the heroes of his formative years in London. He’s still osmosing his past. And whatever else, things are already a lot more interesting than the last time an Italian designer helmed Burberry.