In Julien Dossena's capable hands, a cocktail of far-flung cultures was shaken, not stirred, making for one of the season's best collections. 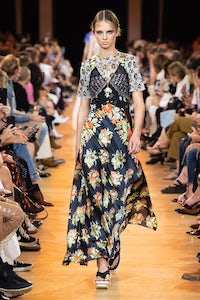 In Julien Dossena's capable hands, a cocktail of far-flung cultures was shaken, not stirred, making for one of the season's best collections.

PARIS, France — The escapist mindset that's shaping the season took a global turn in Paris this week, delivering bits and bobs taken from far-flung cultures and assembled in eclectic ways. That's quite a hippie take on the art of dressing up — or down — and one that asks for unremitting control in order to avoid sloppy, lazy style propositions.

Control is exactly what Julien Dossena demonstrated today at Paco Rabanne, proving his worth as one of the very few auteurs among fashion's new guard while delivering one of the season's best collections. "It's always the same Parisian girl, mixing men's and women's pieces. Now she is traveling: wherever she goes, she picks up something and adds it to her wardrobe," Dossena explained backstage.

The "picking up" was actually a lot more than a mere pillaging. Rather, it was an endless morphing. Shimmering sari silks turned into clean-cut tunics, while mannish trousers got a paper bag waist and a karate movement, and jeans got an opulent surface treatment. The layering was intense, but the effect was lightweight. A memorable punk-krishna collection from Jean Paul Gaultier from around 1994 came to mind.

In Dossena's capable hands, the ingredients of the perfect vision of bohemia got shaken, not stirred, in angular ways, which is what made it all so fresh. Playing with this kind of multi-culti imagery can be a little bit tricky.

But Dossena managed to succeed because his approach to dressmaking is extremely rigorous. It felt indeed like he let go of any rigidity to embrace something more wild and free. Or, as a t-shirt on the catwalk stated aloud, "Lose yourself." Indeed, and in the best way possible, Julien Dossena lost himself today, and scored.