The designer came out fighting on behalf of the suit and his core principles, but the result was too solemn to reboot his relevance. 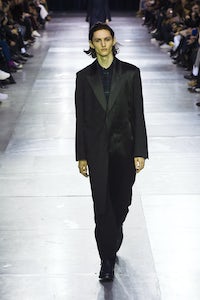 The designer came out fighting on behalf of the suit and his core principles, but the result was too solemn to reboot his relevance.

PARIS, France — When Paul Smith’s wife-to-be took him to the haute couture collections in Paris in 1966, he was in the audience for the show in which Yves Saint Laurent first offered the epochal “Le Smoking” tuxedo for women. The experience seared the suit on the young designer’s brain. He has since built a global business on tailoring.

As BoF pointed out the other day, that business is challenged by the mass appetite for anything other than Smith’s signature. Was it brave or foolhardy for him to double down in the collections for men and women he showed on Sunday night, ignore the naysayers and come out fighting on behalf of the suit? Well, it was honourable. “I cannot and will not cut my conscience to fit this year's fashions.” (That’s not Paul, it’s author Lillian Hellman taking a stand in 1952.)

It was also solemn and dull, which was odd when Smith was so upbeat backstage as he talked about the different elements of his past that had been subtly insinuated into the collection. He said the venue was lit in such a way that it reminded him of the budget lighting effects at the clubs like the UFO (where Pink Floyd was the house band) he went to when he was a teen. The graphics in the show were inspired by the early 20th century illustrator Edmund Dulac, popular with hippies. “Psychedelia? That was my era,” Smith enthused. A black leather jacket bore the embroidered rubric DREAMER on its back, against a psychedelic backdrop. It was a real cuckoo chick of a piece, with everything around it being so tailored and monotone.

There were hits of colour – a bright orange turtleneck under a brick red suit, a cyan blue ensemble (tee, jacket, pants and topcoat) – as a reminder that Smith is pretty sharp with bold shades. And the show could be considered a success in terms of restating other core principles. But, if the aim was a reboot to relevance, it wasn’t enough.