The designer's latest collection was even more on-brand than usual, with a concise, graphic message and a strong 1960s undertone. 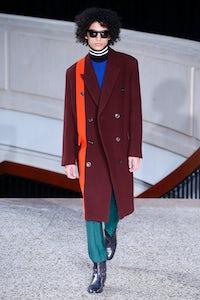 The designer's latest collection was even more on-brand than usual, with a concise, graphic message and a strong 1960s undertone.

PARIS, France — A Paul Smith show comes with a series of expectations: there will be youthfulness; a sense of classicism with a twist; humour, joy and colour. Season after season, Sir Paul continues exploring and expanding the limits of his very own recipe, coming across as consistent instead of repetitive. All he needs is a touch of the unexpected, a tweak to his proportions and volumes, to make it all fresh, once again, time after time.

The collection Smith presented today was, if possible, even more quintessentially Paul Smith than usual. Maybe that's because it came with a strong 1960s undertone: the uber-optimistic decade one naturally associates with the designer. tailoring was sharp and slim, cropped trousers and boxy jackets; embroidered paisley motifs swarming on suits and shirts hinted at the exoticism and bohemia of that time; colour-block, zip-up knit tops worn under oversized coats were redolent of vintage sportswear. Mixed and matched together, it made for a concise, graphic message, highlighted by the generous injection of solid brights in the outerwear.

This is rarely a show to which you come to have a fashion revelation. Paul Smith's position in the system is built upon his constant, witty reinvention of classicism. Today, he delivered once more with his wonderfully light British touch. 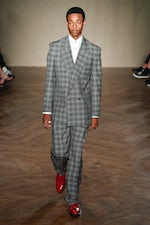 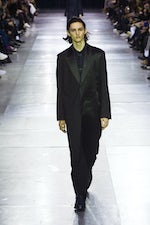 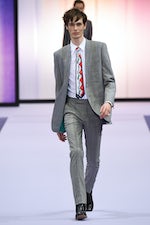