Anthony Vaccarello’s pistols were loaded, but he was firing blanks in comparison to the shots that Yves Saint Laurent took in his glory days. 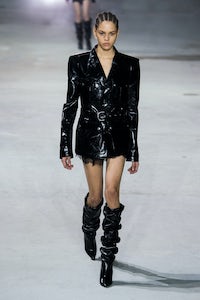 Anthony Vaccarello’s pistols were loaded, but he was firing blanks in comparison to the shots that Yves Saint Laurent took in his glory days.

PARIS, France — There’s no denying that Anthony Vaccarello has a vision for Saint Laurent. He offered 106 iterations of it in his sophomore show on Tuesday night... 106 variations on a theme, this time including men in the mix.

It’s a curious thing. Maybe the legacy of a talent as protean as Yves Saint Laurent is so overwhelming that you need to fixate on one or two elements per season to maintain equilibrium. There’s always next season to introduce one or two more (the fashion equivalent of “tomorrow is another day”). It was that way with Tom Ford and Hedi Slimane. And so it is with Anthony Vaccarello.

Subversion, dark romanticism with a hint of perversity: these were the elements that Vaccarello settled on. Sounded promising, one hitch being that Yves himself had so much more to subvert with his proposals. Nipple-baring sheer tops ain’t wot they used t’be. (Nor are women in pants, for that matter.) As for perversity, that was an inspiration that came naturally to Saint Laurent because he lived it.

Heaven forfend that I should point the finger at the polite, unassuming Vaccarello for similarly transgressive behavior. So you might say that Vaccarello’s pistols were loaded, but he was firing blanks in comparison to the shots that Saint Laurent took in his glory days. He sure as hell stuck to his guns for the duration of the performance, however. And, in the end, the subversion perversely surfaced in the sheer normality that infiltrated the “Saint Laurent” stuff.

There were two acts. Pick a face-off. Day and night? Raw and polished? There was continuity throughout the collection in the shape – mostly abbreviated, squarely broad-shouldered, or one-shouldered, often with flounces or fans of fabric subverting the silhouette. Before he was swept away in a tidal wave of well-wishers (Pierre Berge and Catherine Deneuve, stalwarts of the old guard, significantly on hand), Vaccarello mentioned something about the relevance of couture techniques. The first act of the show emphasised skins, the second sparkle, but there was an atelier’s ingenuity in the way leather was manipulated as artfully as velvet.

It will be opined to the end of time that none of his successors is as skilful a colorist as Yves Saint Laurent. Vaccarello didn’t even try. Brown, brown, black, black. Plus an interesting metallic blue and a feast of silver hardware. And that brings us to the point that there is a Saint Laurent constituency that neither knows nor cares about the Way Back When. At a pinch, they might be aware of what Hedi Slimane did and, if so, nothing that Anthony Vaccarello is offering will scare their horses. If not, there was still an entire wardrobe on offer here. The subversion, the dark romance, the perversity…that was all the editorial stuff: the pelmet skirts and sheer tops and glamorous fetishwear. There were also cableknit sweaters and jeans, a parka and a double-breasted coat dress, stark and chic.

The menswear had the peculiar incidental feel of Tomas Maier’s at Bottega Veneta in Milan the other day. When you’re a boychild sharing runway room with an insolent Mica Arganaraz in an asymmetrical slash of savagely abbreviated cloth, a pair of sneakers with "1979 Bad Lieutenant" ballpointed on the sole are hardly going to pass muster as a rebel yell.