The tropical-hued collection was much less complicated than in the past, with simple shapes, silhouettes and a strong emphasis on print. 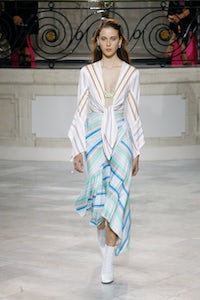 The tropical-hued collection was much less complicated than in the past, with simple shapes, silhouettes and a strong emphasis on print.

LONDON, United Kingdom — Peter Pilotto and Christopher de Vos’s newest collection was all about the kitsch appeal of Japan. The design duo travelled to Okinawa earlier this year and said they came back feeling very zen. Their collection was certainly much less complicated than previous seasons, with simple shapes and silhouettes and a strong emphasis on print, which Peter Pilotto became known for during the digital printing boom of the mid-2000s.

The washed-out, aquarium palette of turquoise, lavender, mint and coral had a kitsch quality, evoking the taste of sweet bubble-gum. It was the warmer colours that worked best, like the russet orange and yellow on a floral silk slip dress. A red and yellow striped woven number, figure-hugging and finished with bathing suit detailing, also stood out. These pieces worked particularly well because of the ease with which they were cut, allowing the prints to breathe.

There were also striped silk tracksuits with drawstring circular cut-outs on the sleeves — less Adidas and more cocktail party — and t-shirts with P.P. branding done in a 1970s-style graphic with Art Nouveau florals, which were also were blown up onto silk. Elsewhere, there were parts of the show dedicated to embellished check, striped jersey and bold lace. “How do we do tropical but in an interesting washed-out way?” was the question they set out to answer. It’s safe to say they hit their target, without it looking too jungle or detached.