The collection, inspired by a trip to Vienna’s Museum of Applied Arts, successfully underscored Peter Pilotto's way with colour and texture. 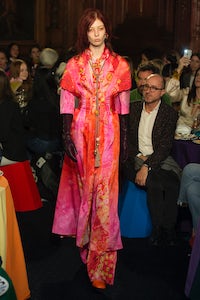 The collection, inspired by a trip to Vienna’s Museum of Applied Arts, successfully underscored Peter Pilotto's way with colour and texture.

LONDON, United Kingdom — A trip to Vienna’s Museum of Applied Arts led Peter Pilotto and Christopher de Vos down the path to their latest collection, which applied a kaleidoscopic view of the museum’s diverse variety of treasures. Persian rugs, secessionist Vienna, Medieval tapestries, blown glass, Japanese kimonos and Biedermeier furniture were somehow turned into a collection that was rich in texture and heavily influenced by the heady days of 1970s bohemia. Dresses crafted from stripes of silk — in tangerine red, caramel brown and pink — were followed by ombre iterations in hammered satin. There were pretty takes on modest dressing with plenty of exotically printed dresses over long-sleeved blouses, soupy trousers and thick silk ribbons tied around the neck. Leather opera gloves and resin petal earrings were a nice touch.

Mainly, though, there was the emphasis on textiles, exemplified by the patchworks of tufted cashmere and shearling, file coupé fabrics, as well as the piped knit that the designers used to make sinuous dresses. What stood out was the shawl collared silk tailoring in piped crêpe and quilted silk, based on the louche smoking robes traditionally worn by men. Another highlight were the sequinned kaftan gowns with tasselled ropes and smocked waistlines that carried the patchouli-scented spirit of Talitha Getty, lounging in a haze of jet-set bohemian hedonism in Morocco in the 1960s.

The show itself was a dinner-cum-catwalk experience held in Tramp, one of London’s more notorious member’s nightclubs. It was a natural setting, having been the hotspot for 1970s girls who danced the night away in their bias cut Ossie Clark dresses. It’s the kind of place that the design duo said they could imagine their customer coming in the evening. Guests were seated for dinner on coloured stools by Martino Gamper, with food served on vibrant plates that Pilotto and de Vos made in collaboration with 1882 Ltd, one of England’s oldest ceramicists. All the colour on the tables made a compelling case for the clothes and, watching the show, it’s that colour and texture that has become Peter Pilotto’s version of status symbols. Looking around at the women in the room (art collectors, fashion editors, society women) only seemed to strengthen that notion.