From the very beginning, the designer has impressed with the way his extreme youth has produced clothes of such worldly sophistication. 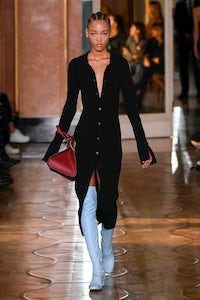 From the very beginning, the designer has impressed with the way his extreme youth has produced clothes of such worldly sophistication.

PARIS, France — After last season’s deep dive into the leather-panted, decadent 1980s glamour of Robert Mapplethorpe’s New York, Joseph Altuzarra has been knitting booties. And baby blankets. Next month, he will become the father of a baby girl. Unsurprisingly, he admits it was a radical departure working on his new collection. Family has been uppermost in his mind. First, his mum and grandmother, who taught him to knit when he was a kid. The sweaters they made him inspired the crochet that opened the show. Then, his father. The ties he’d wear, the shirts he gave Joseph, also made their presence felt. And, finally, his grandfathers, both of whom died in the past year. Their silk scarves inspired patterns in the collection.

Those connections made Altuzarra think about the kind of clothes you’d want to pass on to your children. Clothes that were filled with love, and a sense of personal history. So his father’s striped shirt became a shirt-dress, his grandfathers’ polka-dotted foulards were turned into handkerchief-hemmed gypsy dresses, those granny knits struck a naïve, homespun note. And Michel Gaubert’s soundtrack added the warm buzz of happy memories.

But Altuzarra’s design ethos is still a long way from the folks back home. The essence of the collection remained the powerfully sensual slink that first brought him to the attention of Carine Roitfeld, his early booster when she was editrix of Vogue Paris. A skirt with buttons up the thigh? Unbuttoned. A top with buttons across the shoulder? Unbuttoned. A sensual carelessness in shirts loose over floor-sweeping skirts, a crocheted cling in a dress slit high on the thigh… Altuzarra’s daughter will have an interesting wardrobe when she grows up.

Actually, growing up might have been the theme of this collection. From the very beginning, Altuzarra has impressed with the way his extreme youth has produced clothes of such worldly sophistication. He’s grown into that world view. The proof was in the pinpoint tailoring here. “My friends are wearing suits more, they’re getting better positions at work,” he said, “And it feels like a more mature, grown-up look.” But still, the family. “I wanted to do suits that looked like they were passed on from my grandfather, but they’d had the waist nipped in.” So that happened.

For all that, there’s little chance you'll find Altuzarra in a suit. His leather pants are another story. “I wear them every day,” he proclaims in the face of incipient fatherhood. “I’m just going to be a really cool dad.”