The designer did away with his signature whimsy and cool girl funk in lieu of something stripped back and sure to have commercial appeal. 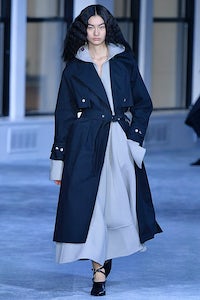 The designer did away with his signature whimsy and cool girl funk in lieu of something stripped back and sure to have commercial appeal.

NEW YORK, United States — No, you’re not imagining it, the world is crazier than ever before. There’s two ways to deal with that fact: go crazy yourself or step back and try to steel yourself against the madness. Phillip Lim opted for the latter with his fall 2019 collection, a manifesto of sorts for pared-down, no-nonsense dressing.

“I was craving sturdy clothes,” he said backstage at his midtown venue. “I was craving uniforms, things we can rely on. In these times where nothing’s quite stable, I wanted the clothing to feel stable.”

Lim did away with his signature whimsy and cool girl funkiness in lieu of something stripped back and grounded, mostly in a minimalist mode that owed a thing or two to Phoebe Philo’s Celine. But it suited him.

He tinkered with familiar wardrobe staples—skirts and suiting, cargo pants and tunic tops—but built to emphasize cocooning proportions and a sense of effortless utility. Fabrics looked substantial but not clunky and the palette stayed mostly in easy shades of khaki, navy, cream and grey, with hints of forest green and some zebra stripes thrown in for fun.

The results had commercial appeal but also felt elevated. The navy mac that opened the show, for example, had a rounded back and a nipped, belted waist, as Lim wanted to create volumes that were feminine but tough. It was worn over a double-faced hoodie-dress in creamy gray which fell to the ankle, cozy looking but also unexpectedly elegant. “Talk about strength and authority,” Lim said.

Later, a khaki coat with side slits had a nice feeling of momentum while a double-breasted coat in dove gray with slashed sleeves looked almost like it was hanging from the model’s shoulders, like being wrapped in a blanket.

Sportier pieces and tailored bits also stood out, like an anorak with voluminous bishop sleeves and sharp-shouldered blazers in menswear fabrics that could be easily worn but still had a sense of drama. Beautifully cut cargo pants in white or navy—either cropped and tapered or wide-legged and soupy—came with contrast stitching. Full-sleeved belted tops could be worn with a skirt, as they were here, or, one could imagine, tossed on with a pair of jeans. Two fleeces at the end, an acknowledgment of Lim’s love of Patagonia, were a fun way to add texture, as was a green coat in two contrasting lengths of rangy (fake) shearling.

Pulling back can be difficult, especially in an industry that rewards loud statements, but in Lim’s case, it produced a clarity and focus that was hard to ignore.