The designer’s more pared back approach felt like a fresh step forward, resulting in a nice balance of romance and utility. 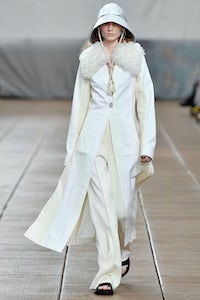 The designer’s more pared back approach felt like a fresh step forward, resulting in a nice balance of romance and utility.

NEW YORK, United States — Phillip Lim designed the bucket hats long before he could know that his runway show, held on the chain-link fenced roof of a high school, would take place during a rain storm. “The show must go on,” he said with a shrug backstage, which was composed of some classrooms turned fashion triage center, buzzing with models and hair and make-up people.

An unhurried sense of nomadic cool permeates much of Lim’s work. This season, he said, he and his team took their design cues from two clashing thoughts: Marrakech and “pop 1960s.”

Those two ideas come with a lot of baggage, but Lim is savvy enough not to take them too literally. “When we start, no one knows how it’s going to work, but our job is to form a new visual language,” he explained. So the faded blanket skirts and dresses with shaggy fringe were a sophisticated stand-in for Moroccan caftans while the metallics, mini-skirts, and cut-outs gently suggested the futuristic friskiness of mid-century designers like Rudi Gernreich and André Courrèges. When layered together, the two ideas merged nicely into something like Southwest hippie-wear for a slick urbanite.

Lim often mines, successfully, off-kilter shapes and clunky silhouettes, but he was relatively restrained here, emphasising a lean, narrow line and lots of movement. Highlights were the sleeveless, floor-grazing coats that were cut in a way that left jaunty swinging flaps as the models walked, the bisected and draped blanket dresses edged fringe, the fluid, slouchy pants, and the silver metallics rendered as a toss-on dress with a plunging, undulating neckline or a tunic and pants combo that looked low-key and chic.

Pops of orange and a cherry print added some subtle graphic appeal. Lim has been on a maximalist streak lately, so this paring back felt like a fresh step forward. The end result was a nice balance of romance and utility.

The sporty sunglasses, the bucket hats, thickset sandals, fringed crossbody carriers and mini leather bucket bags prove that, while he excels at ready-to-wear that’s wearable yet distinctive, Lim has a preternatural gift with accessories. He has a sense of humour, too — the finale and his bow took place to the sounds of the Eurythmics song “Here Comes the Rain.”