It’s Ralph Lauren’s movie, we're just living in it. Plus, Christopher John Rogers and Area are young and fabulous on Day 2 of New York Fashion Week.

It’s Ralph Lauren’s movie, we're just living in it. Plus, Christopher John Rogers and Area are young and fabulous on Day 2 of New York Fashion Week.

NEW YORK, United States — I was a teenager when Helmut Lang started showing in New York in the late 1990s. Back then, the system was “broken,” too. He changed it, intentionally or not, by insisting on presenting his collection before the European shows, and all the big New York designers, tired of having to wait until so late in the season, followed in his lead.

Twenty years later, the designer is long gone from the company that carries his name, but the brand is still alive, backed by Uniqlo-parent Fast Retailing and designed by Mark Howard Thomas and Thomas Cawson. They showed their Spring/Summer 2020 collection on Saturday, Day Two of New York Fashion Week. 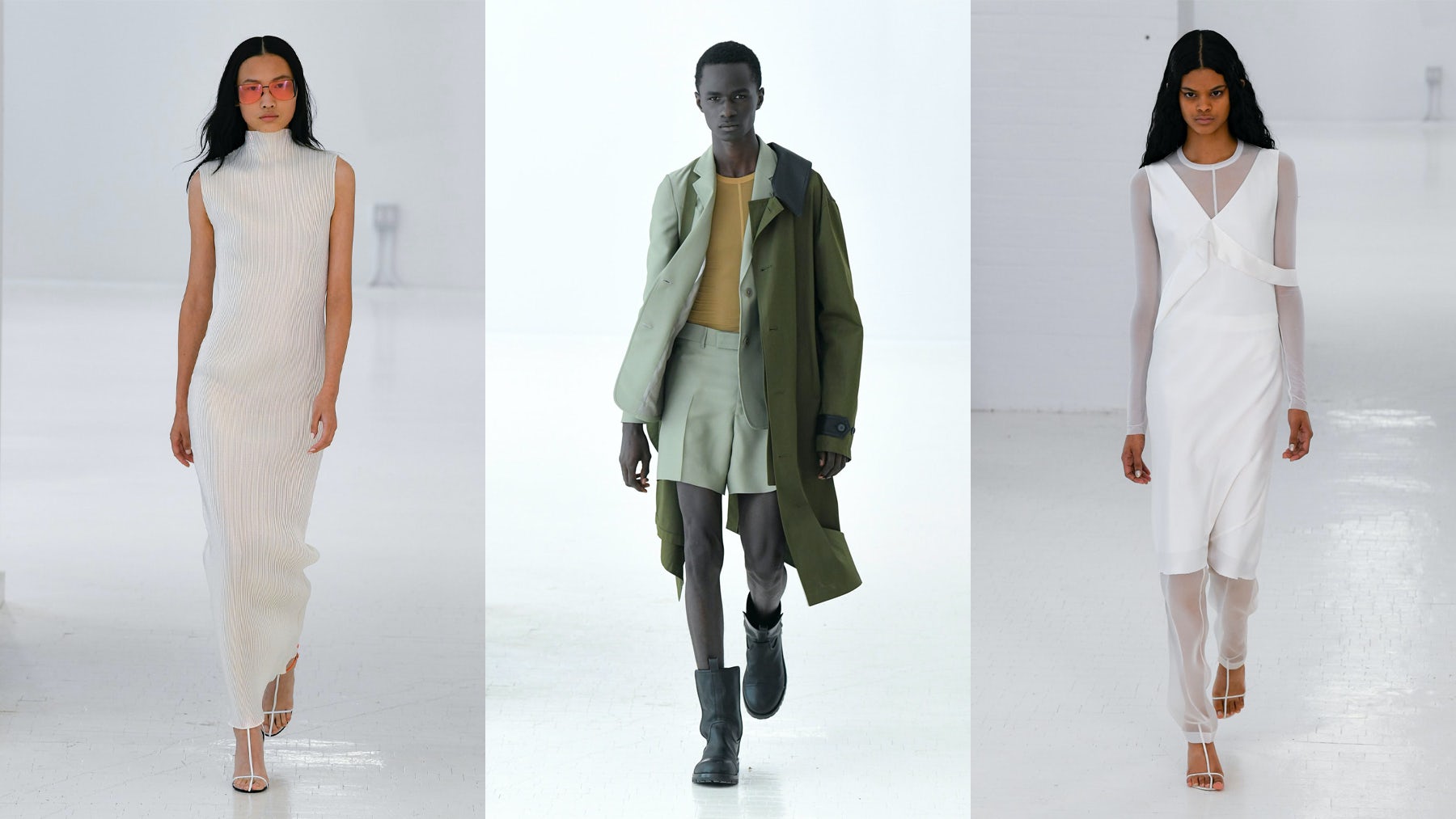 I might have been too young for fashion week when Lang first crossed the Atlantic, but I’ve watched the videos on Youtube, and what I do know is that the clothes we saw on the runway today were faithful to the designer’s vision — so much so that they have not changed at all. Brand revivals are a tricky thing, especially for a label like Lang, which is constantly referenced by other designers. For Fast Retailing, billing these clothes as strict reissues could be a bankable idea. After all, they still look good. But if the idea is to build genuine excitement around the brand, they may need a new creative approach.

Helmut Lang isn’t the only decades-old brand looking to woo a new generation. This past week, Kate Spade New York’s parent company Tapestry lost its chief executive, Victor Luis, who was excused after months of poor stock performance. Luis was trying to create America’s answer to LVMH, acquiring both Stuart Weitzman and Kate Spade to build an accessible luxury portfolio anchored by Coach. Analysts cited still-dragging sales at Kate Spade as a core reason for Luis’ departure. But it’s more complicated than that. None of the group’s brands are growing that quickly as the mid-market continues to suffer.

What will survive in that segment are strong brands offering something you can’t get anywhere else, at any price point. Of all the Tapestry labels, Kate Spade, which also showed on Saturday, has perhaps the best chance at actually achieving this. In the US and Asia in particular, feminine fashion is constantly in demand, and the brand’s DNA — dresses for the hostess, bags for the working girl — scratches that itch. It doesn’t have to look cool, but it needs to feel new.

Creative director Nicola Glass has struggled to get it right, although today’s effort was an improvement on past seasons. Her kooky crochet and leather safari dresses were styled in a loose, comfortable way, and worn by a bunch of different types of women, from twin influencers Reece and Molly Blutstein to petite-and-graying model Lyn Slater. 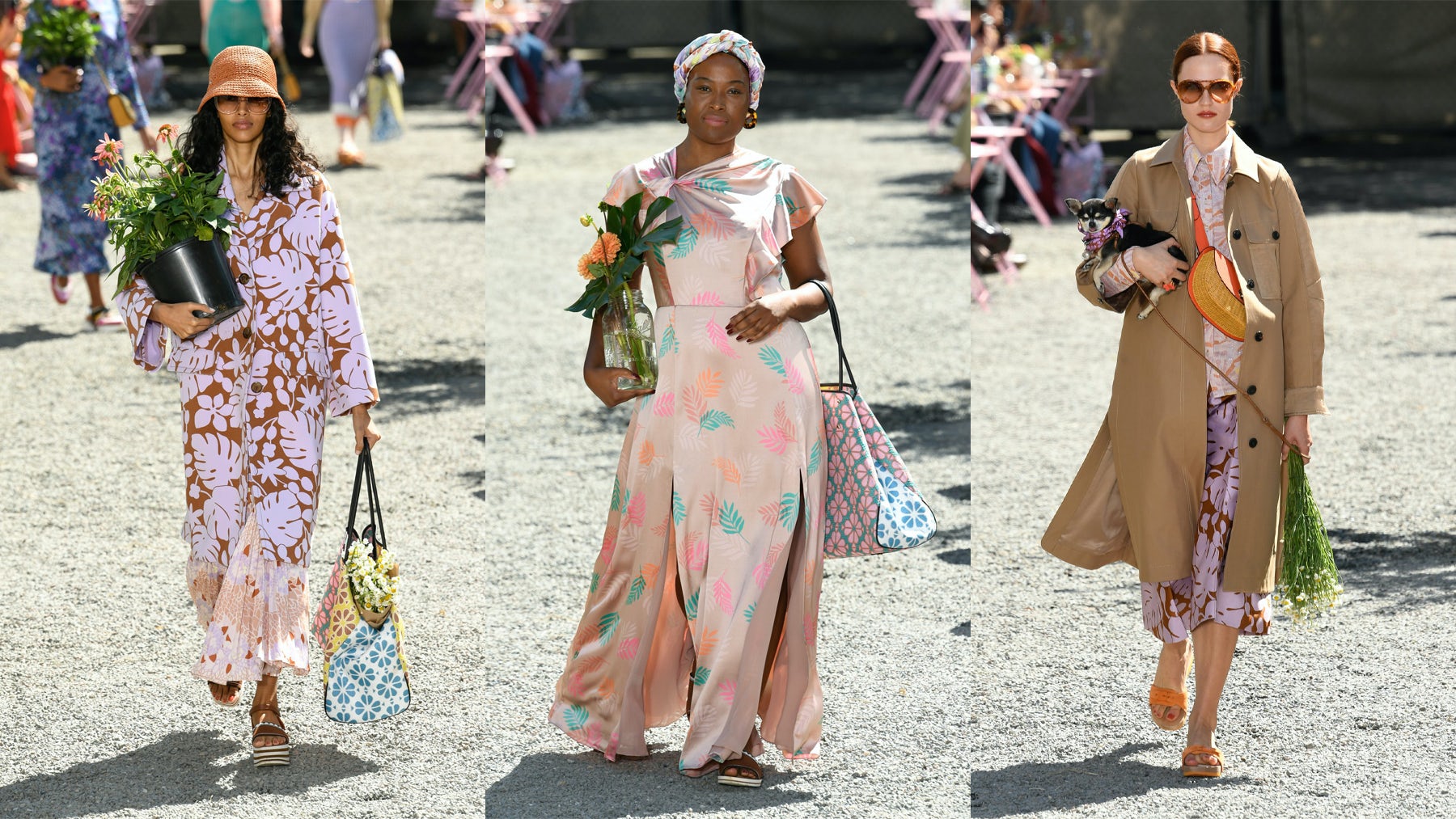 Ulla Johnson’s clothes are definitely worn in real life. A good percentage of the audience, from the first row to the back of the room, was dressed in her neo-boho peasant dresses and puffed-sleeve denim jumpsuits. They fit right in with the tie-dyed runway, but whether or not showing on the runway makes sense for her is another matter. Johnson’s clothes don’t need to be seen this way: while she’s good at evolving trends from season to season, there’s nothing much to chew on, nothing surprising. This season offered nice riffs on traditional shibori and printed dresses exploding with ruffles, with expertly finished beading, embroidery and needlework. 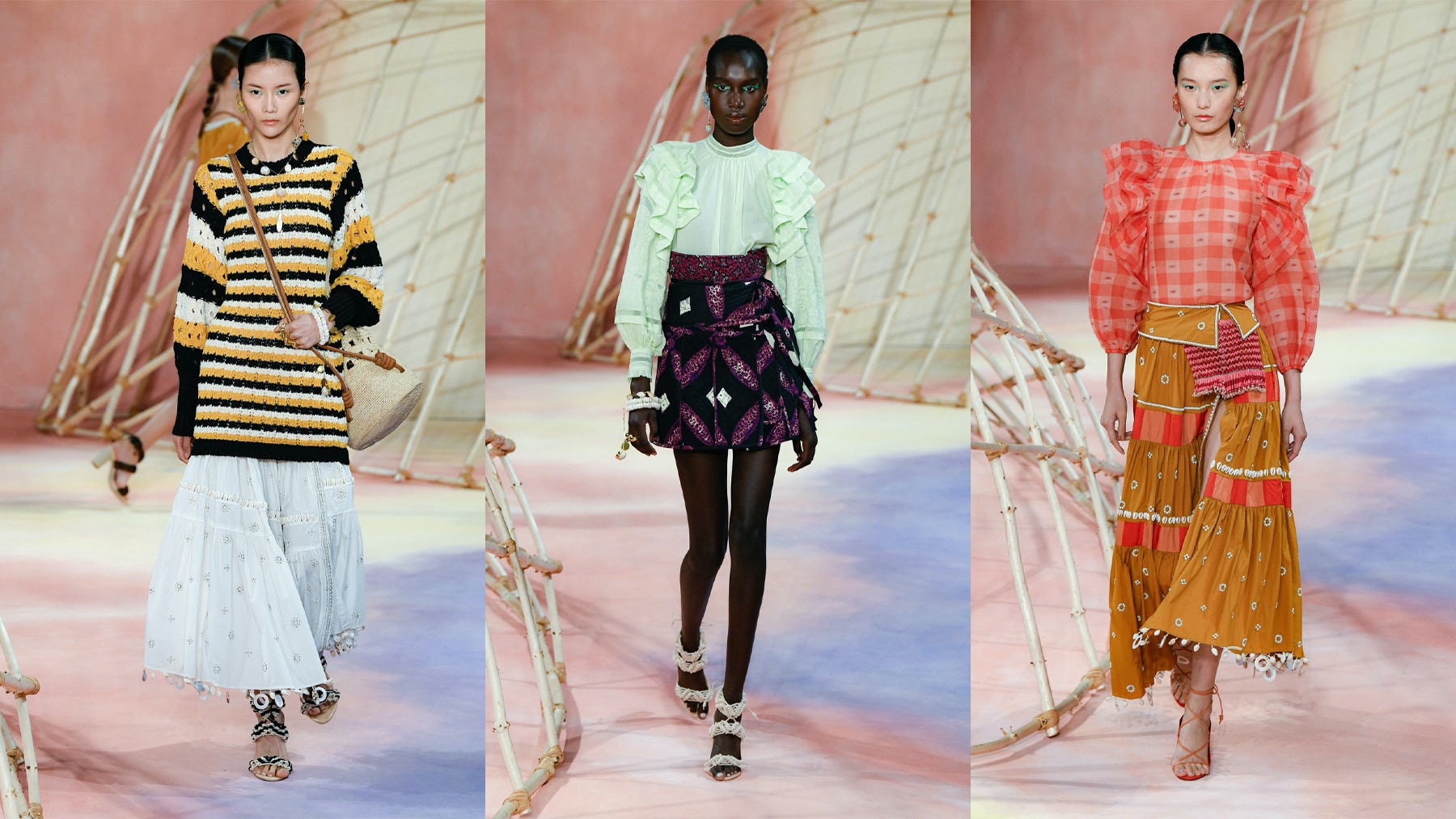 If Johnson does want to continue staging a runway show, she might think about diversifying her casting: her brand is powered by her loyal customer base, and it would be helpful to see how the garments will move on them, rather than a standard set of hanger models. Otherwise, she’d do well throwing a party. Nilüfer Yanya, the British singer-songwriter who provided the live soundtrack, was pretty fantastic — and she looked great in the clothes, too.

Two young labels with a lot of promise — and fabulosity — are Christopher John Rogers and Area, which both showed at Spring Studios on Saturday afternoon. Rogers, a recent graduate of the Savannah College of Art and Design, is just three seasons in. Area’s Beckett Fogg and Piotrek Panszczyk, who went to Parsons, are a bit further along. Both have a point of view, something in short supply at every level of fashion.

Before his show, which received a standing ovation, Rogers cited a long string of typical designer references: Paul Poiret, Gauguin’s Tahitian paintings. You’ve heard it before. But he said he mixed all that with comic relief. Not only in the models he cast — “personalities” born to vogue on the runway — but in the flamboyant, explosively colourful clothes he showed. Rogers’ technique isn’t perfect and his references are vintage. But he can grow out of that. What he does seem to innately understand is desirability: how to tie a sash so it’s slung low on the hips, or ruche a coral dress just right.

Area doesn’t follow the aesthetic wind as closely as some of its peers that have come up on the Lower East Side over the past several years. Fogg and Panszczyk like glitz, so they keep applying more and more to their high-glamour meditation on bad taste. This season, they piled dozens of “Area” chains onto cropped blazers and built rhinestone-studded chandeliers into gowns. Sort of tacky, but also sort of elegant. Ralph Lauren is the king of elegance, although there’s nothing subversive about his take. Instead, he is playing the same movie on repeat.

For the past few seasons, he has put a good deal of horsepower into bringing his all-American dream to life with amped-up runway shows. There was the unforgettable 50th Anniversary celebration on Bethesda Terrace in Central Park, and the drive up to his car garage in Bedford, New York. Last season, it was Ralph’s Café: a French bistro set up in his Madison Avenue flagship.

Once again, Saturday night was something to remember. Down on Wall Street in a building built in 1928 — just a year before the stock market crashed — Lauren’s team constructed a big-band room. “Ralph’s Club” had art deco paneling and chandeliers, embroidered cotton napkins and printed matchboxes. It looked like a movie set. And there were certainly plenty of actors on hand, including Crazy Rich Asians star Henry Golding in a purple velvet tux and queen Cate Blanchett all dressed in black, to play bit parts.

Lauren, however, was the star of this scene. “You really, truly are the most amazing American designer we have,” singer Janelle Monae said near the end of her ground-shaking set. 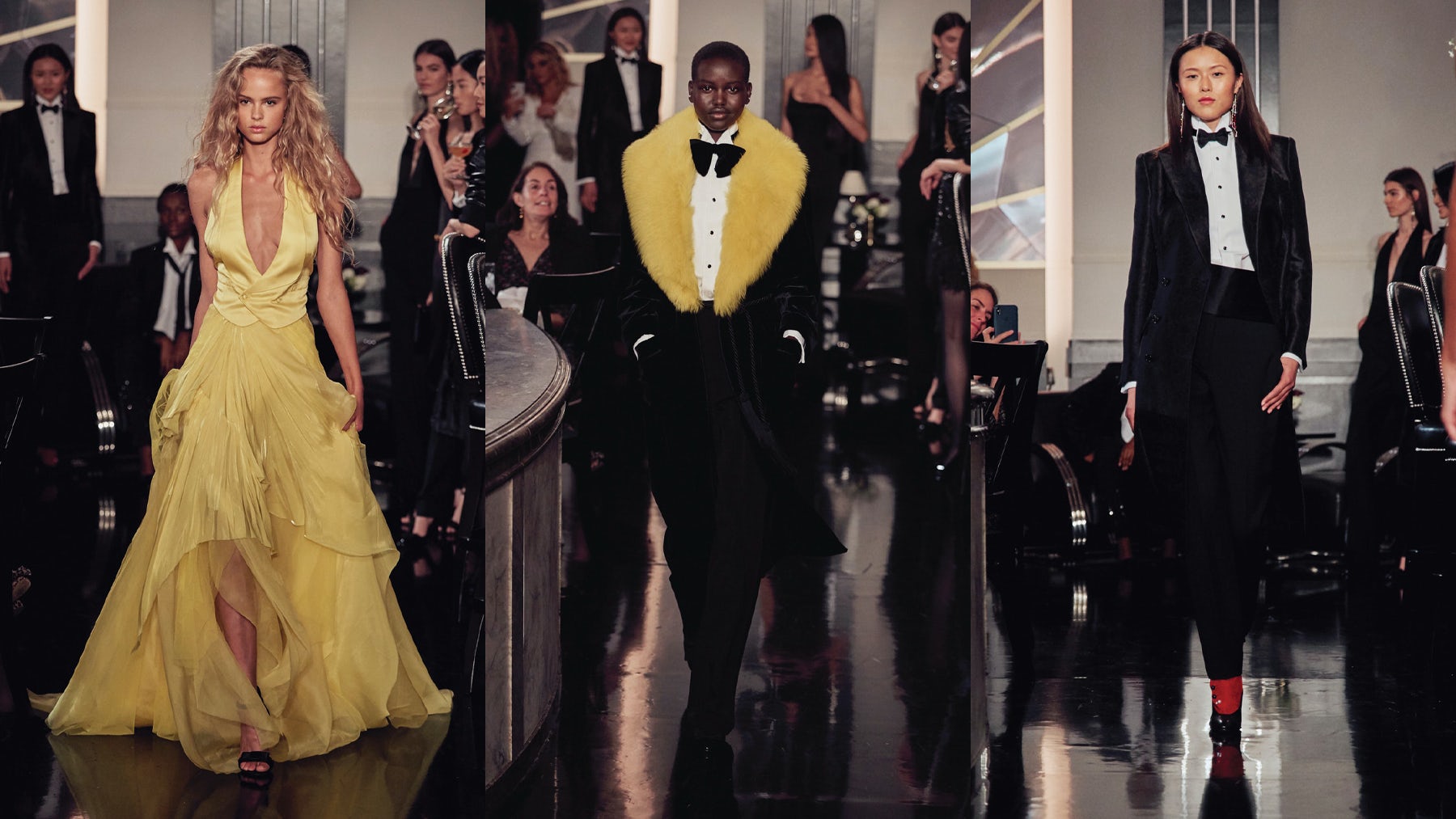 So, how did the clothes — some available to buy right now on Ralphlauren.com — rate? Mostly consisting of variations on tuxedos, shiny, gowns in primary colours and slick leather pieces worn by modern-day Breck Girls and one-time Victoria’s Secret Angels, the collection was perfect costuming for an evening at Ralph’s Club. But was it anything more than that? Maybe for those still dreaming of a part in Lauren’s epic.