Prada On the Edge

Miuccia Prada showed a collection founded on oppositions, extreme power and extreme femininity — where sweetness read as a disguise, a distraction and a dare. 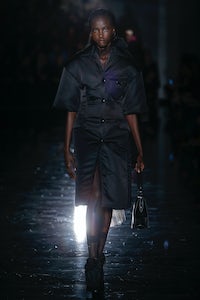 Prada On the Edge

Miuccia Prada showed a collection founded on oppositions, extreme power and extreme femininity — where sweetness read as a disguise, a distraction and a dare.

MILAN, Italy — The exhibition that currently takes up most of the space at the Fondazione Prada covers the years when Mussolini was in power in Italy. It has an aching timeliness with its detailing of the impact that an autocratic popinjay can have on popular culture. “My thoughts are influencing the Fondazione,” Miuccia Prada declared after her show on Thursday night. It made sense to assume some connection between what she is showing in her galleries, and what she showed on her catwalk.

It was a sensational idea, if not particularly elevating. What it makes clear is how much creativity suffered under Fascism. “When things are getting bad, even art disappears,” Miuccia acknowledged. “And what worries me for the art, worries me for the fashion.” But that has sparked a quiet fury in her. “We have to be ready to identify and respond,” she added. So what she showed were clothes for women who were ready to resist. It made for a collection founded on oppositions: extreme power and extreme femininity. Paillettes, tulle petticoats and bows in the same outfit as padded tech pieces. “My excuse for the show was the freedom of a woman in the night, super-sexy without being bothered.” I believe I heard Miuccia say that. “How to be powerful and still be feminine.”

Laudable. It reminded me of “A Girl Walks Home Alone at Night," a movie a whole lot more people should see, if only because it couches the #TimesUp debate — and its partner #MeToo — in such primal, incontrovertible terms. “#MeToo? I think about it since so many years,” said Miuccia. “It’s time to really make it happen.”

Maybe this collection was her contribution to facilitation. There was a lot of sweet prom dress girliness balanced on ankle socks and heels — there was even a manga flapper, sheathed in electric filaments — but it was matched to bulky tweeds and sporty nylons, hyper-protective. There was even a variation of the sanitation worker that Raf Simons offered at Calvin Klein. Defensive, vaguely apocalyptic. In that context, the sweetness, in embroidered tulle veils, read as a disguise, a distraction, a dare. You hardly needed Bill Murray and Wes Anderson in the front row to underline the depth of irony in such a notion. And the discombobulating layering of Frederic Sanchez's soundtrack — Blondie, Bryan Ferry, Tom Waits — only added to the dislocated mood.

The show took place in the top floors of a recently completed tower in the Fondazione Prada compound. In the arid industrial space below were mounted neons of Prada iconography: The bananas! The monkey! It’s the art of Prada to make you feel on the edge of something. She did it again.