In the face of so much conceptual complexity in her art world, Miuccia Prada opted for simplicity — the human touch — in her fashion world. 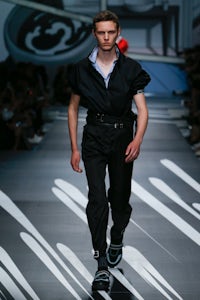 In the face of so much conceptual complexity in her art world, Miuccia Prada opted for simplicity — the human touch — in her fashion world.

MILAN, Italy — Miuccia Prada hasn’t seen any of David Lynch’s new Twin Peaks. “I’m keeping it for the summer,” she said cheerily, “on the boat, when I’m bored.” It will be fascinating to hear her verdict, especially in light of the men’s show she presented on Sunday night, which she initially described as the result of her feeling “trapped between virtual reality and humanity.”

That seems to be more or less what is happening to everyone in Lynchland, with occasionally horrific results. No horror in Prada, of course, but the same effort to reconcile our primal human physicality (“Live real, love real, die real,” as Miuccia said) and the vast, unpredictable unknowability of almost everything else. Lynch advocates surrender to chaos, Prada is still bent on extracting some kind of order from it all.

That’s why she’d fallen in love with comics: their simple frame-by-frame logic, the humanity of the handmade. At the same time, Miuccia found their peculiar stop/start quality appealing. It’s a lot like life. “They’re the opposite of fake virtual reality, but at the same time they’re very fragmented.” In commissioning a couple of artists to create graphic analogies for her state of mind, she’d asked that they “do stories, push the human touch, not too superhero.”

The Prada showspace was lined with huge dislocated frames, alienation writ super-large. On Prada’s Instagram, the frames were allowed to form into short vignettes that offered a more cohesive glimpse of narrative possibility. Maybe that in itself was exactly the juxtaposition Miuccia was addressing. “You have to embrace the new world, but you don’t want to lose your essential humanity,” she mused. “Do you put them together, or keep them separate? The whole world is facing this challenge.”

Never mind that her challenge was to somehow convey all this in a collection of clothing. Truth be told, it was one of those seasons where the ebb and flow of the designer’s thought processes were more entrancing than the physical expression of those processes. Right now, the Fondazione Prada in Milan is showing a virtual reality piece by the director Alejandro Gonzalez Inarritu that is wringing tears from viewers. Meanwhile, the Fondazione Prada in Venice has a fourway between artist Thomas Demand, filmmaker Alexander Kluge, costume designer Anna Viebrock and curator Udo Kittelmann that is the most extraordinary, engulfing experience, literally stepping through a door (actually, there are many doors to choose from) into a parallel reality. (Lynch again!) So it was understandable that, in the face of so much conceptual complexity in her art world, Miuccia would opt for simplicity – the human touch - in her fashion world.

My takeaway from the show was a jumpsuit. “I’m crazy about jumpsuits,” Miuccia enthused. “I fell in love, no reason. Probably because it’s simple.” As well as which, it tied into the collection’s utilitarian subtext of functional human clothing (the apotheosis of the bumbag, right here, right now). Concerned that simplicity might be edging towards naivete, Miuccia weighted a number of looks with big heavy classic coats in flannel and herringbone. “The right counterpart,” she decided. “That’s just fashion.”

Frederic Sanchez’s soundtrack switched between New Wave radio stations, and all at once, the boys on the runway were cool kids in the 80s, with their semi-Stray Cat dos, and their Joe Jackson shoes, collars turned up, pants hitched high. And those coats, borrowed from dad, or pinched from a second-hand shop. In its own perverse way, it was a vision of innocence, comic strip clarity in a world spinning out of control. We know what happens to innocents in Lynchland. Can they survive in Pradaworld?