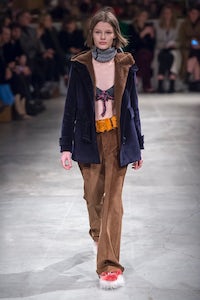 MILAN, Italy — Miuccia Prada took her bow in a brown corduroy pantsuit. Is there anything more… um… average? That was precisely the point when she showed all that corduroy in her men’s show in January. “The opposite of important,” she said at the time.

But so much has happened in the last six weeks. The world is already a very different place. And if Miuccia flashed back to that moment in January with the handful of corduroy pieces that opened her latest presentation, she then proceeded to offer a collection for women that was the opposite of the opposite of important.

As much as she insisted that she never wants to be directly political, she also acknowledged that she “couldn’t not take notice of what was happening.” The set borrowed the perverse domesticity of the backdrop for the men’s show — beds made up with vinyl sheets, covered here with fuzzy bedspreads — but the walls were covered with posters and visual keepsakes (photobooth shots of “me and my friends”) that suggested an old-school activist, maybe even a budding feminist sensibility.

Miuccia loved the idea of Fellini’s City of Women. “Nothing to do with the film, just the title,” she insisted, but that particular movie’s surreal vision of the many ways a woman can exercise power resonated in the collection she showed. In fact, if you really want to get ten-cent-word-pretentious, you could pin down this new outing as Miuccia’s meditation on what actually constitutes a woman’s power in a world where men have yet again chillingly asserted their dominance.

Maybe that’s why she was especially absorbed by the idea of seduction. She isolated feathers, embroidery, bras as traditional tools of the seductress. They seemed very much from another era — Mae West’s, perhaps — but you could look beyond that and wonder if what Miuccia was questioning was how much desire itself had been co-opted by imposed male values.

That was certainly something that came up in her men’s show but, as I said, the world has changed since then. In January, Saskia Debrouw in powder-blue angora looked like a fetishist’s plaything. Here, the palette had darkened. Picture her as a simmering wildcat. Time for the kickback.

Miuccia claimed all the fuzziness — starting with the on-set bedspreads presumably — was shorthand for something primal. That was clear with the furry Inuit boots. (All the boots were standouts.) You could easily extend that to the surreal overload of tone and texture: rivulets of crystal and leather fringe; fluffs of fluoro feather; fabrics that clashed like worlds colliding. Shell necklaces were the new pearls. The literal visual element in the collection was drawn from the work of Robert McGinnis, who was responsible for the iconic Breakfast at Tiffany’s poster and all the classic James Bond ads. He also made artwork for pulp thrillers in the 50s and 60s, painting femmes fatales with killer curves, glamorous but lethal. They were printed on bad-girl sheaths and pencil skirts.

It’s clear she feels profoundly conflicted about glamour and seduction — throughout her backstage exchanges, she maintained a running internal dialogue about whether they were bad or stupid or neither — but in addressing her own ambiguous feelings, Miuccia Prada has gone back to the well where her label was once at its strongest: surreal, sexy, serious and, for all her uncertainty, utterly alluring.