Youthful idealism is Miuccia Prada's antidote to a world full of violence and fear. 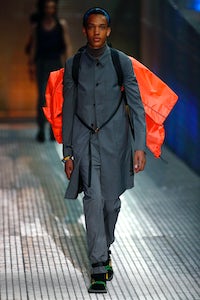 Youthful idealism is Miuccia Prada's antidote to a world full of violence and fear.

MILAN, Italy — Miuccia Prada insisted she’d never heard the word “wanderlust” before, but it lit a fire under her new collection, with its tribe of boys and girls carrying their lives in their backpacks as they trekked into the unknown in their sandals and socks.

If travel was the inspiration for the last Prada collections, Mrs P saw those excursions as a journey through the past. Here, we were gazing into the gaping maw of an uncertain future. “I’m full of fear,” she said. “I’m optimistic on principle, but I see what is happening around, and my fear is mounting.”

Still, she offered a fully formed testament to hope, or, at least, the hope that accompanies youthful idealism. The show’s rave-iness evoked the legendary, ecstasy-soaked summers of love in the late 1980s, Frederic Sanchez’s soundtrack mixing the electro splendour of Faithless with Bedtime Story, the song Bjork wrote for Madonna. “Travelling to the arms of unconsciousness,” sang Madonna. “The trip always has different meanings,” Miuccia added cryptically.

For an incisive thinker like Miuccia Prada, it shouldn’t be difficult to put together a collection that repudiates all the bullshit that male-dominated constructs are spewing into the cultural mainstream. There was a sense here that she’s maybe just getting started. In the past, Prada’s collections for men have emphasized male vulnerability, ineffectuality even. What was shown today — a men’s collection for Spring 2017, a Resort collection for women — emphasised the commonality in diversity. The issue is no longer vulnerability; it’s survival, regardless of gender, race, colour or creed.

So both collections were about ready-for-anything mobility. It was a fashion show so boys’ backpacks dangled a handy pair of dress shoes. The girls’ dangled heels. So did the last male model’s. (That’s ready for anything.) But the overriding message was The Mix. There was an element of customisation, with embroidery and doodads and ethnic flourishes, ways to individualise your stuff. Otherwise, there was just that reassuring sense of tribalism. Back in some much more secure day, Prada created a world around a black nylon backpack. There it was today, nestled in the middle of a riot of pattern and colour. Back to the source — you know we have no choice but to go there. 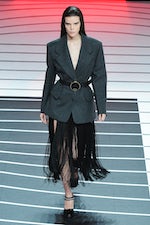 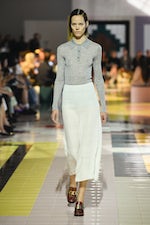 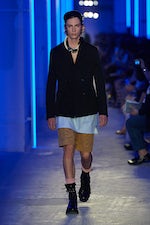 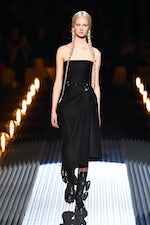