Jack and Lazaro have come home, but there is a vague uneasiness about what it is exactly that they stand for in New York's fashion pantheon. 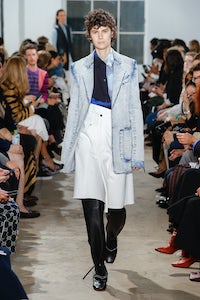 Jack and Lazaro have come home, but there is a vague uneasiness about what it is exactly that they stand for in New York's fashion pantheon.

NEW YORK, United States — In the 18th century, wealthy English families would send their sons on a Grand Tour of Europe, a rite of passage intended to widen a young man’s cultural horizons before he settled down in life. Lazaro Hernandez and Jack McCollough have just completed their own version of a Grand Tour, returning to New York after two seasons in Paris.

But, on the evidence of their showing on Monday, they looked happy to celebrate shrinking horizons, rather than widening. Hernandez conceded as much when he said, “In Paris, you get into embroideries, feather work, all that technique, but we asked ourselves, ‘What if we do the whole collection in one fabric – denim?’”

So the hardiness, the functionality of denim set the tone for the new Proenza Schouler offering. In the past, Hernandez and McCollough have celebrated expensive, often arcane craft in their designs. Here, the techniques couldn’t have been more prosaic — acid wash, tie dye — with silhouettes to match: blazer, jumper dress, jean jacket, trench coat, wrap denim skirt. The single glimmer of Proenza’s provocative past was the footwear, thigh boots in an almost rubbery plongé leather, some of them tied at the ankle.

The designers brought an artist into the fold this season, but Hernandez wanted it made clear Berlin-based Isa Genzken’s contribution wasn’t the kind of collaboration that has become a bit of a fashion cliché. She used Proenza pieces in some bricolaged sculptures which she sent Hernandez and McCollough in July. They said they “riffed” off them. But they also looked to be riffing off something else Genzken-related. She is something of a fashion favourite.

Phoebe Philo hosted the opening night of her Celine-backed exhibition at MOMA in 2013, and Raf Simons has chosen her as one of his best-loved artists. His spirit followed Genzken into Hernandez and McCollough’s collection. The photo prints — flowers and New York cityscapes — they used as embellishments might have been Genzken-inspired but they also looked very much Raf. So did the oversize tie dye shirts (echoes of Simons’ collab with artist Sterling Ruby). There was enough topstitched indigo denim to summon up the Belgian designer’s reconceptualisation of Calvin Klein. The general rawness of the collection suggested the same (a shared pioneer spirit).

Hernandez and McCollough have opted out of the maximalism of Paris only to find that the road to their American reality check has already been paved – by a Belgian! Which highlights a vague uneasiness about what it is exactly that they stand for in New York's fashion pantheon.

Proenza Schouler: "We Don't Have to Be a Billion Dollar Brand"