At Rachel Comey, Dinner and a (Runway) Show

The designer’s gathering at the Met Breuer’s Flora Bar was an utterly pleasurable way to begin the season. 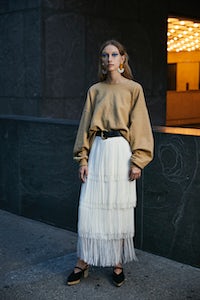 At Rachel Comey, Dinner and a (Runway) Show

The designer’s gathering at the Met Breuer’s Flora Bar was an utterly pleasurable way to begin the season.

NEW YORK, United States — Like many designers looking to break out of the rut of the system, Rachel Comey began experimenting with show formats a few years back, staging what are essentially lively dinner parties populated with interesting people, many of whom have nothing to do with the fashion industry. This dynamic makes for a far more pleasurable evening because there is an element of the unknown, an elevated feeling of anticipation around the identity of your seat partner. (This season, attendees included the New Yorker writer Ariel Levy, the actress Emily Mortimer, and the Instagram-famous poet Cleo Wade).

In past renditions of Comey’s salon concept — which has taken place everywhere from Pioneer Works in Red Hook, Brooklyn, to Hauser & Wirth’s Manuela restaurant in Los Angeles’ Arts District — the actual runway show has been complemented by a live reading or a musical performance or some other mind-opening thing. The most consistent element, other than the clothes, has been good food, mostly cooked by the chef Ignacio Mattos. His downtown New York restaurant, Estella, is a favourite of the Obamas and also of Comey’s, whose shop is just around the corner.

Mattos is also the chef at Flora Bar in the Met Breuer museum, which also happened to be an ideal venue for Comey to present her spring collection. This season, the runway show was coursed out into three sections alongside the meal. A table full of starters brought us a series of textured, layered looks — most notably, a one-shouldered, softly puckered gingham dress — while the second course, which included plates of potato chip-and-truffle-studded tuna tartare, was an exercise in power dressing, Comey-style. That means nipped-in suiting and plenty of black, yes, but also high-neck tulle blouses smocked just so. The mains — rich lobster and crab dumplings and a perfectly cooked steak decorated with tiny white mushrooms — brought with them voluminous organza house dresses that would make it quite easy to leave room for dessert. (Of which there were three. We recommend the smokey chocolate cake hidden by a large dollop of whipped cream).

“Our pairings are unapologetic, disregarding expectations in favour of the experience of the wearer,” read the handled-with-care show notes. That pretty much sums up Comey’s philosophy and also explains why so many attendees were happily dressed in her designs, plucked from their very own closets — not a sample showroom. What Comey presents time and again is nicely crafted, inventive clothes made for women who desire a side of provocation with their fashion.