There is love in the way Rahul Mishra clothes are so intricately crafted, and delicately embroidered — but this time he introduced a new urban touch. 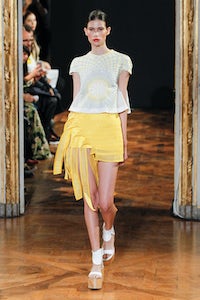 There is love in the way Rahul Mishra clothes are so intricately crafted, and delicately embroidered — but this time he introduced a new urban touch.

PARIS, France — “Dimensions are illusion,” said Rahul Mishra, speaking like a spiritual guru rather than an International Woolmark Prize winner after showing in Paris for the third time. He sounded even more like he was beaming in from a higher plane when he added, “More than three dimensions is speculation, but the fourth dimension is love.” And so Mishra named his show Fourth Dimension.

There is love in his clothes — the way they are so intricately crafted, delicately embroidered. The handcrafts of his native India are his calling card. With this collection though, Mishra made more of a nod to the 21st century than he has before. He talked about “enhancing 3D with human hands.” embroidery created complex relief effects, building up shoulders to theatrical effect. Petals of organza added dimension to a top worn with fluid denim pants. That urban touch was new.

Mishra was intrigued by morphing, the way shapes can flow into each other. There was a lot of it in skirts that dissolved into strips. Another key motif was the patterns of embroidery that radiated out from a point, like a sunburst. “Everything starts with one dot,” the designer said gnomically.

The collection wasn’t wholly successful, as you might expect when a designer tries to pin abstract philosophical notions to organza and cotton. The way that Mishra tried to morph stretch and stiff, for instance, erred on the side of the latter. Dimensions aren’t such an illusion after all. 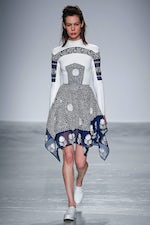