Clare Waight Keller wanted to play with contrasts, and the payoff would have been the opposites attracting, reconciling. But that didn’t happen here. 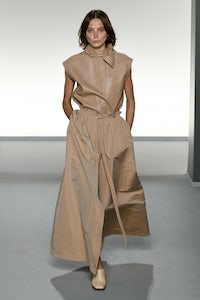 Clare Waight Keller wanted to play with contrasts, and the payoff would have been the opposites attracting, reconciling. But that didn’t happen here.

PARIS, France — In 1993, Clare Waight Keller was living in New York, working for Calvin Klein, clubbing at the Sound Factory, a proper downtown tomboy in distressed denim much like the ones she was wearing on Sunday night, backstage at Givenchy. They were from the collection she showed, but they were made from jeans upcycled from the way back when. A tangible link with Waight Keller’s past, in other words. That was her guiding light with her new designs. “The last few seasons have been polished, super-luxury. I wanted to get back into the roots of who I am.” A word she came back to over and over again was “raw.”

But that wasn’t the whole story. When New York Clare travelled to Paris for work in the early 90s, she was struck by how different the style of the city was. “The opulence, the floral extravagance, especially at the couture houses…very distinct moments happening in different cities.” If New York was minimal Calvin Klein, Paris was maximal Christian Lacroix. Waight Keller wanted to play on that contrast in her new collection: raw meets polished under the sign of Givenchy.

Oh, there was one more thing. Waight Keller’s reading about the early 90s brought her to Alison Yarrow’s “90s Bitch,” which takes apart the myth of female empowerment that prevailed in the period. “The era felt liberating, but on reflection, it was very different,” said Waight Keller. Those Calvin slipdresses? Not so much emblematic of a new freedom, more a new face on sexploitation. That’s how she sees it now. “I wanted to go back to covering the body.” So here there were long dresses, super-flou from top to toe. But there was also Kaia Gerber in a satin bra and black leather pencil skirt. And here were more pencil skirts, with leather bandeau tops. Colour me confused.

But perhaps confusion was the theme. Waight Keller did, after all, mention the beauty of dichotomy in her notes, and the collection set up a series of oppositions: lush gardens and urban grit, shimmering silk and shredded denim, New York and Paris, of course. But the problem in such an approach was crystallised in the soundtrack, which skittered from hip hop to classical piano in a jerky stop-start way. The show was similarly schizo. The payoff for Waight Keller would have been the opposites attracting, reconciling, but that didn’t happen here. They just didn’t get on. That’s not to say that an artful merchandiser couldn’t find a way to make a slimline Bermuda shorts suit or a poplin sundress seem appropriate next summer. But easy commercial pieces weren’t the game Waight Keller wanted to play here.