Alessandro Sartori is a curious combination of iconoclast and traditionalist. His latest collection was notable for its precise formality, moving away from streetwear in men’s fashion. 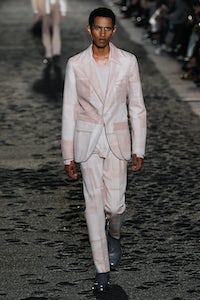 Alessandro Sartori is a curious combination of iconoclast and traditionalist. His latest collection was notable for its precise formality, moving away from streetwear in men’s fashion.

MILAN, Italy — When Alessandro Sartori returned to Zegna, and to Milan, with a promise to use his fashion shows to re-animate overlooked parts of the city, no one could have anticipated a venue like the one he chose for his presentation on Friday night.

The Falck steelworks in Sesto San Giovanni were, for much of the 20th century, a hive of heavy industry to rival anywhere in the world. For the past few decades, they have been abandoned, a vast, spectral rebuke to mortal ambition. Sartori has occasionally exercised something of a film noir sensibility in his collections. He couldn’t have found a more appropriate spot than this place, all shadows and angles and rusting metal thrusting skywards. Nature obliged with a thunderstorm, torrential rain drumming on a roof somewhere miles above the audience.

All that drama aside, the venue was an outsized complement to the rubric that was woven on a label inside jackets: Use the Existing. Under Sartori, the Zegna story is evolving into one of the fashion industry’s most sophisticated commitments to best practice. Upcycled fabrics accounted for 20 percent of the collection. A suit rewoven from mohair scraps off the factory floor, a huge, luxurious coat spun from upcycled cashmere, sportswear in regenerated nylon…each, in their own way, a technical marvel, and also a waystation. “fabric has at least three lives,” said Sartori, already imagining another incarnation for his materials.

Zegna has always been a benchmark of luxury in menswear, so there is some audacity in Sartori’s reconceptualization of the very idea of preciousness. He noted the “crispiness” of some of the fabrics that used recycled or upcycled fibres. That’s because they become shorter as they’re re-used, which makes them tougher.

But the designer claimed this new generation of fabrics inspired him to try new techniques. There were jackets and pants cut from cloth that had been pleated and folded with a crushed look. It was an industrial version of the artisanal effects achieved by Japanese designers like Issey Miyake. There was a similarly industrial edge with the printing and dyeing effects, as though Sartori had taken on board the history of the venue he’d selected. The last outfit – “modern evening”, he called it – was a chiné suit in a silk and nylon blend. It sported a ferrous stain that managed to look both seductive and toxic at the same time.

Sartori is a curious combination of iconoclast and traditionalist. His latest collection was notable for its precise formality: the sleekness of a single-buttoned jacket, the trim trousers creating a sharp silhouette. Even the sportier pieces (voluminous blousons, some sensational denims) had a suit-y top-and-pants uniformity. As the first date on the men’s calendar in Milan and Paris, the show looked to consolidate the move away from streetwear in men’s fashion. The footwear alone told its own tale.