Reference and Remix at Kenzo

Carol Lim and Humberto Leon's collection was their most referential in recent times, owing debts to Vetements and Hedi Slimane's seedy Saint Laurent. 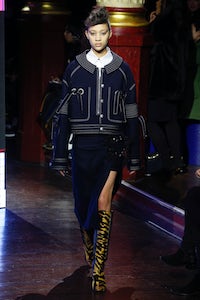 Reference and Remix at Kenzo

Carol Lim and Humberto Leon's collection was their most referential in recent times, owing debts to Vetements and Hedi Slimane's seedy Saint Laurent.

PARIS, France — In today's age of appropriation, there are many designers who act more like curators than inventors of new forms. They are closer to stylists or DJs in the way they work, creating something new from an assemblage of existing pieces. Carol Lim and Humberto Leon, creative directors at Kenzo, belong to this category. (Of course, they rose to prominence as retailers, which is a form of curating).

The collection which Lim and Leon presented yesterday, in a tricky set in the pompous space of the Salle Wagram, was their most referential in recent times. A number of dowdy dresses with elongated sleeves, worn with spiky boots, kept screaming Vetements. So did the slightly monastic aura of some of the pieces and the general air of neo-punk cool. Albeit inspired by manga and Sailor Moon — and there were actually quite a few charming, cartoonish nods — the collection and its clash of patterns and garish 1980s references owed a major debt to Hedi Slimane's seedy Saint Laurent, too.

Of course, there is nothing too bad in appropriating these codes and remixing them to form a new Kenzo vision. The output was a lot more polished and clean then Vetements and, in this sense, original. What was lacking, however, was the sense of joy, nonchalance and optimism which Kenzo Takada turned into his own brand of cool, and which Leon and Lim updated so well at the beginning of their tenure. Not this time. 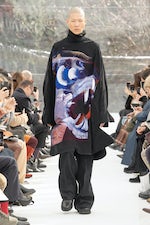 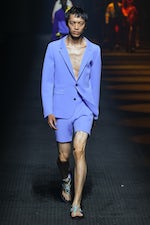 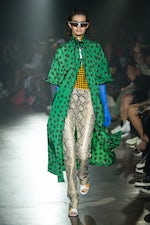 A Cheerful Straightforwardness at Kenzo 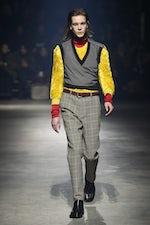