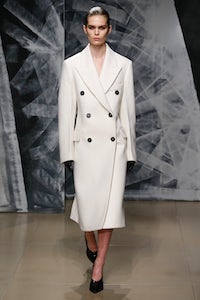 MILAN, Italy — “Precise, but not so precise,” was how Rodolfo Paglialunga described his new collection for Jil Sander, which was, he added, his own favourite since he arrived at the house two years ago. Easy to see why that should be so. With his strictly tailored coats and suits, Paglialunga nailed the refined rigour that was a Sander signature.

Even when things looked most minimal, they were somehow refreshing, like the dress that was an artful elongation of a plain white cotton shirt, with corset lacing at the back, or the black shirt and skirt combination. There was something else going on, however. The set was inspired by The Cabinet of Dr Caligari, the nightmarish classic of German Expressionist cinema. The soundtrack included snippets from the equally nightmarish Under the Skin, with Scarlett Johansson playing an alien who conceals her true form under a human exterior. Paglialunga played on that idea. Peeking out from under a double-breasted navy jacket was a silvery second-skin.

The designer elaborated on the sci-fi sheen with lurex knits, metallic leathers, foil-printed silks and shaggy, glittering mohairs. This was the “not so precise” bit of the collection and it suffered a little by comparison with the shapely clarity of the opening passage. Still, an increasingly confident Paglialunga has carved a way forward for himself at Sander, and the house at least seems to have a future. 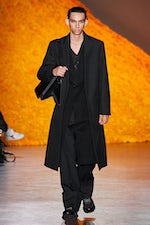 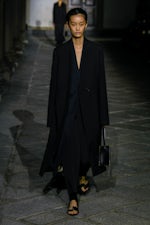 Jil Sander’s Walk on the Wild Side 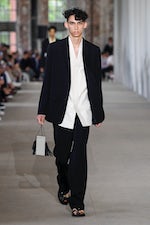 The Soul of Jil Sander 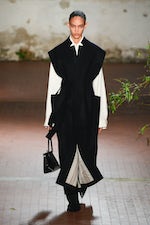