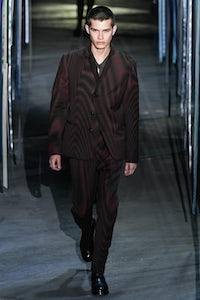 MILAN, Italy — Alessandro Sartori is a numbers man. Numbers are the minutiae of men’s tailoring, meting out change in minuscule measurements. Here’s a big fr’instance: what Sartori saw as a boxiness in the jackets he’d designed for his latest collection for Ermenegildo was the result of a 2cm expansion from last season. Hardly “boxy” in my book. But such is the precision of the tailor’s eye.

Another number he was partial to this season was 37. Multi-media artist Anne Patterson had installed a towering cube made from thousands of ribbons — 37 kilometres of them — in the centre of a derelict foundry on the outskirts of Milan. Sartori gave her 300 swatches of old Zegna fabrics, she picked the ones she liked and they were cut into strips. It was a spectacular realisation of Sartori’s commitment to the concept of Second Generation: the new life that can be given to old fabrics. Patterson turned them into an art work which will be open to the public till the end of January. Sartori turned them into clothes.

Offcuts, unsold garments, waste fibres, broken fibres: all were transformed by the alchemy of Zegna’s technicians. It was hard to believe that a glossy black gabardine was on its second life, or a thick-piled cashmere sweater had already been around the block in another incarnation. Circularity is a prime goal as fashion strives for sustainability. It’s always kind of revelatory to see it expressed at Zegna in luxurious clothing that you’d be inclined to cherish for a long time. (That long view is necessary, said Sartori, given that the fibres can turn to powder on the third or fourth go round.) But it wasn’t only regenerated wools that were infused with a new preciousness. A shimmering bomber was cut from regenerated nylon. There were also cashmeres handloomed by women in San Patrignano, a community that helps people in recovery. Accountability is as critical as “keepability” to Sartori.

“Our art should always respect the earth,” is his motto. He connected that idea here to a refreshed formality, including a new take on the three-piece suit. The smartest piece of tailoring was a one-and-a-half-breasted jacket with a slight diagonal on the closing, and trousers that were pipestem-fitted, anchored to chunky derbies. In the wake of the brand’s global campaign to define What Makes a Man, it felt like a provocative appeal to a new much younger customer for Zegna, with an edge as sharp as the cheekbones of the boys who paraded through Patterson’s techno forest. This narrow silhouette was counterpointed by over-size outerwear, particularly huge topcoats with a deep pleat in the back that were Sartori’s version of the mitteleuropäische classic, the loden coat, except, instead of the familiar olive-green, there was a patchwork of jacquard checks or undulating moiré. The way Sartori plays with such fabric effects has been a running theme throughout his career. Again, there was a familiar sheen, like the light in a film noir: artifice in service to authenticity. A collaboration with the German camera company Leica on a collection of classically styled camera bags underscored that point.