Part of this collection’s appeal was its lack of order: the styling suggested thirty-five women in thirty-five moments of their lives. 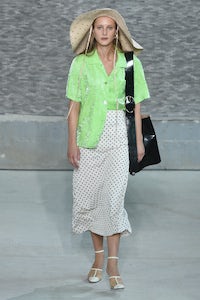 Part of this collection’s appeal was its lack of order: the styling suggested thirty-five women in thirty-five moments of their lives.

LONDON, United Kingdom — Women are complex creatures with complex lives, a fact that Rejina Pyo is keenly aware of, and keeps at the forefront of her strategy when designing fashion for them. The idea of a ‘total look’, according to her, is unrealistic and outdated — a fact she mused upon backstage when justifying the eclectic line-up of clothing she had just sent out for Spring Summer 2019 in the lobby of London’s Centrepoint tower, stirring the curiosity of peak hour commuters pouring out of the nearby tube station.

Rather than some unattainable muse, Pyo’s inspirations are drawn from her own hectic life and those of her it-girl friends and legion fans. Probed about the collection’s hubbub of maximalist and minimalist elements, she offered a simple riposte: choice, and the freedom to dress up or down according to mood and occasion. Essentially, the utility that any good wardrobe provides — the fun back in functional, as it were.

In her spare time, Pyo is a keen gallery hopper, and cited Rothko (for gradient, and colour), and Angela de la Cruz (for texture and form: her paintings crumple off walls as sculptures) as some of the moodboard fodder for the season. Alongside, she voiced a personal challenge to work with colours she was previously unsure how to handle. Enter the lime green marabou, melon-toned rib knits, fairy floss pink pyjama sets and white-on-rust polka dots that provided some of the funkier propositions in this decade-spanning trip down memory lane.

Part of this collection’s appeal was its lack of order: the styling suggested thirty-five women in thirty-five moments of their lives, not a complex jigsaw of matching product sent out in threes. This never felt more evident than when a leopard bowling shirt and bare legs marched out seconds before an austere cotton tunic over giant taupe trousers. One part LA surf punk, one part pastoral gallery girl. Pyo’s is a liberated and inclusive proposition, and its picking up steam.