Repurposing a Romantic Past at Valentino

Pierpaolo Piccioli’s ability to tap the tension between contrasts guaranteed that the men’s collection he showed on Tuesday night was a career high point. 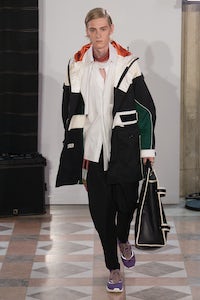 Repurposing a Romantic Past at Valentino

Pierpaolo Piccioli’s ability to tap the tension between contrasts guaranteed that the men’s collection he showed on Tuesday night was a career high point.

PARIS, France — Pierpaolo Piccioli, charged with taking Valentino into the future, is quintessentially Roman. He lives in a city that is swollen with the past, but alive with reckless, pretty young things.  That kind of tension produced la dolce vita: live today to the max, because yesterday is a pile of dusty old ruins and tomorrow is whatever.

Piccioli broods on the tension between contrasts. It guaranteed that the men’s collection he showed on Tuesday night was a career high point for him. “Vulcan and Mercury,” he mused. Count on Italians to think about gods in a conversational situation, but what he was trying to convey was a face-off between dynamism and intimacy: the spontaneity of the street, the culture of uniqueness that shapes haute couture. Extremes they may be, but they have come to determine the personality of the house of Valentino since Piccioli and his erstwhile partner Maria Grazia Chiuri took the reins in 2008. The world’s favourite sneakers over here and, over there, gowns that drive grown women wild with their ephemeral beauty.

Piccioli showed no suits. Only tracksuits. But he insinuated couture elements into them, rainbows of stitching across a zipped-up trackie. A nylon K-way was elevated with embroidery, even more of it lavished on a top Piccioli called a “coach jacket” (Craig T. Nelson on an afterschool workout). “New ways to look at something you already know,” was his way of describing it.

Even more so with the new logo. Valentino was the first house to introduce the designer logo (thanks to Jackie Onassis). So it wasn’t an idea that had much appeal for Piccioli. But then he noticed how interested young people — kids on his team, models etc — were in those old emblems.  “What is new for them is what they don’t know,” he realized.  So, sign in please, VLTN, writ large on the tees that friends of the house were already wearing at the show.

The notion of repurposing the familiar fired up Piccioli’s approach to items that have become contemporary basics. “It’s more subversive to change a real man’s wardrobe from within,” he said. That sounded like designer-speak, except for the fact that — who doesn’t love a Trojan horse? A plain white poplin shirt was anything but, as chaste as a choirboy’s surplice from the front, sliced open right up the back. The same split opened up a classic Perfecto jacket at the back. Piccioli called the splits “romantic gestures”. Again with the designer-speak, but it actually made sense if you bought the vulnerability of the design flourish. Besides, it looked hella good.

As far as repurposing the familiar goes, don’t get me started on the sneakers. The tensions that Piccioli took inspiration from were consummated in footwear that married craft and computer, Mayan motifs and digital doodads. They were super-fancy but they were utterly street. That’s an instinct.

On Piccioli’s mood board, there was a photocopy of an old book cover, “Adolescent Boys of East London.” I looked it up. Published 1966, cover pic by Roger Mayne, one of the best street photographers ever. Piccioli’s Roman. The past does matter.