For all that out-there volume, it was actually discipline that read most convincingly in this collection. 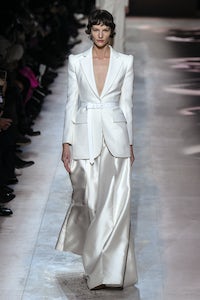 For all that out-there volume, it was actually discipline that read most convincingly in this collection.

PARIS, France — Virginia Woolf and Vita Sackville West endure as one of the great lesbian love stories, enough so that Sissinghurst Castle, Sackville West’s home, is a romantic mecca in the UK. Of course, there are also ardent hordes who are drawn to Sissinghurst for its world-famous garden. Clare Waight Keller straddles both worlds – love-life and plant-life – to the point of obsession. And what better place to exercise her passion than the hothouse culture of haute couture?

She called her new collection a love letter, not only to Virg and Vita, but also to the joy she experienced during her research process. Hats from the 1950’s? They gave Waight Keller some very big ideas, culminating in a domed bridal chapeau for Kaia Gerber that looked like it could pick up signals from the darkest reaches of the multiverse. “And the plush-shaped dresses were a volume I’ve been working on,” Clare added. “I wanted to amplify it to the biggest scale. And I wanted the beauty of the flowers to come through.” It was most gorgeous in the extravagant fluting of Bente Oort’s gown, like an iris furled over and over. Scarcely less winning was the marigold plissé of a strapless floor-sweeper, or Ajok’s major lilac and lace moment.

Curiously, for all that out-there volume, it was actually discipline that read most convincingly in this collection. The extravaganza was reined in by plain leather belts. There was some pretty acute tailoring, again with emphasis on the waist. Waight Keller has always had a grasp of restraint and release. Here, she showed her own take on “le smoking,” an elongated tuxedo jacket that ended with an explosion of skirt. Morticia Addams does red carpet?

Given the time of year (Oscar mere weeks away), it seemed safe to assume the red carpet was the intended destination for many of Waight Keller’s beauteous confections. There are certainly much worse places for them to end up. But — and there always has to be a “but” — it did make you wonder. The show was staged with classical musicians suspended in isolation above the audience, each of them playing solo where they would usually be responding in a group to the guidance of a conductor. It seemed irresistibly symbolic. Is this how designers feel now: isolated, precarious?