Alessandro Dell'Acqua pulled back on decoration to focus on a 1940s silhouette that felt overly referential, but his offbeat hues gave things a lift. 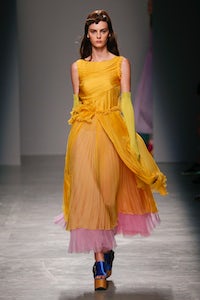 Alessandro Dell'Acqua pulled back on decoration to focus on a 1940s silhouette that felt overly referential, but his offbeat hues gave things a lift.

PARIS, France — Today, fashion shows fall mostly into two opposing categories. On one side are line-ups of haphazard looks, one different from the next, at the service of "individualism." On the other are shows on repeat, hammering viewers with infinite variations of the same look or silhouette, at the service of, well, consistency and brand 'codes.'

Today's Rochas show was all about consistency: from beginning to end, it felt like seeing the same silhouette over and over, in a variety of colors and fabrics. The effect was repetitive, but also, due to the concision of the outing and the singularity of the color palette, quite charming.

Creative director Alessandro Dell'Acqua was in a restrained mood: don't imagine anything too stark or severe, however. He simply did away with decoration and embellishment, stripping back surfaces to focus on drape, flou and colour and draw a 1940s, midi silhouette, anchored to the ground with massive wedges.

Overall, the look was quite literal and referential, but the offbeat hues gave things a little lift. The problem was the abundance of tulle and point d'esprit, which provided a debutante note that felt a little silly. Still, it was entertaining to behold.