Demna Gvasalia's latest collection felt like a forensic analysis of the corrupting nature of power itself, rippling out through the worlds of those that have it and those that don’t. 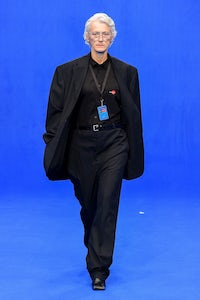 Demna Gvasalia's latest collection felt like a forensic analysis of the corrupting nature of power itself, rippling out through the worlds of those that have it and those that don’t.

PARIS, France — Demna Gvasalia defined his new collection as “dressing for work: power dressing, no matter what one does as a job.” He’s always been fascinated by the subject, particularly as it is embodied in the corporate world. Remember the collection inspired by the men in suits he observed at Kering HQ? But this show felt bigger than a meditation on power dressing. It was more like a forensic analysis of the corrupting nature of power itself, rippling out through the worlds of those that have it, and those that don’t.

When I asked if he felt it was important to make this kind of comment in fashion now, he answered, “It’s necessary as never before. I believe in being engaged through my work. I think it’s more modern than decorative fashion, and it’s also part of my personality. But I just offer a point of view. It’s open for interpretation.” The interpretation with this particular presentation could run and run. Here’s mine.

The set was the kind of circular arena we associate with the United Nations, though it was carpeted, curtained and seated in the shade of blue that has become inescapable as the European Parliament’s visual signature in the years since the UK embarked on Brexit, its hapless effort to sever itself from its European partners. “I wanted to create a clean, new space in the shape of an arena with a minimal and futuristic aesthetic and with the screen blue colour as a symbol of something new,” Gvasalia said. “Like a new chapter. Hopefully, it’s the same for the Parliament.” Through this space there initially circled a handful of men and women in dark suits and topcoats, security passes at the ready. Were they diplomats or corporate sharks? They were accompanied by a retinue of security men and personal assistants (the bag carriers), similarly severe.

Then the frame widened to embrace colour, print, a more Bohemian attitude. These were the art advisers, the gallerists and their assistants. A rando clutched a bouquet of unnaturally blue flowers (Gvasalia gifted journalists with a bouquet of similarly surreal toned blooms), like the men who flog flowers to restaurant-goers. An illegal immigrant? The tone darkened: sunglasses-at-night types, dealers, hackers, tough guys. Then a family vignette, perhaps. A power couple, children, her lovers, his mistresses. Personal trainers. Another try, this time with a trophy wife (the ermine coat!). Live. Die. Repeat. Maybe you get the picture so I can fast-forward through the ever-expanding cast of characters to a grand finale of grand gowns, Nadja Auermann resplendent in black lace, a Teutonic matriarch in full sail, while around her the debutantes of a new age circled in dresses made massive with crinolines. Like chess pieces, they moved, all to the sound of strings straining against a thundering martial beat.

“Spectacle is not really important to make a point,” Gvasalia said, “but I have to admit it attracts attention more immediately and it’s also more fun.” Which is why Sunday in Paris was absorbed with chatter about the Balenciaga extravaganza. And it was that eveningwear that galvanised comment. Was Gvasalia saying goodbye to the street style that has made Balenciaga a commercial behemoth? “It would be hard to say ‘bye to the street because it’s no longer a trend,” he claimed. “It’s now a base of the industry in a way. This show was full of streetwear references reinterpreted and elevated to what I find is its new modern version. I love extravagant, often dramatic dresses — who doesn’t? — but I also love ‘cerebral’ tailoring, crazy sneakers, jersey Ts and jeans. I wanted to bring all this into my aesthetic frame for Balenciaga.”

If there didn’t look to be much “news” as such in the parade of oversize tailoring, handkerchief-hemmed print dresses with linebacker shoulders, and puffas puffed so large the models looked like their heads were mounted on a plaque, there had actually been a few useful developments. Those exaggerated shapes, for instance, can now be converted to create an ordinary shoulder line. The finale gowns could also be de-crinolined to make something more conventionally formfitting. There was a new sneaker, the Tyrex, which was apparently a muscular mutation of the classic Derby. Will it assume the mantle of the mighty Triple S? Better believe there’s a marketing department that hopes so.

Where Gvasalia made some really tantalising moves with this show had nothing to do with clothes. He engaged scent scientist Sissel Tolaas to create an olfactory co-relative for his dissection of power. She made four smells — antiseptic, blood, money and petrol — which were released from behind the ceiling and curtains throughout the presentation. “I think scent is underestimated as a tool of communication,” Gvasalia explained, “and I’m testing this territory of expression in shows now as it really fascinates me.” The smell of blood or money would have added an incredible dimension to his clothes on Sunday. I detected neither because they were overpowered by the more conventional scent of someone seated nearby. There were, however, others who insisted their noses were tickled by a splash of petrol.

But the very notion of the project illuminated Gvasalia’s yen to reach beyond the confines of the “fashion designer” job title. That ambition is one of the things that marks him as special. (Was Rick Owens in the audience on Sunday because he recognised a kindred spirit?) Another thing is his Georgian predisposition to the dark side, which gives his work its provocation and – say it – power. I asked him where hope lies now. “My hope lies in sobriety of mind and the spirit of young generations,” came his solemn response. “But it’s hard to maintain.”

The sociologist Manuel Castells, lauded in the 90s as “the political guru’s guru,” once wrote that the future would be shaped by “the excluded excluding the excluders.” It’s a simple recipe for revolution. The characters that Gvasalia conceived for his collection (and the real world architects, artists, teachers, students and models he cast to play them) represented a kind of Castells cross-section. Made me wonder what he thought of Manuel’s musing. “I agree, but sometimes it’s hard to tell the difference between the excluded and the excluders. The powerful easily become powerless and vice versa.” It's fashion!

One final – consoling? - thought: “To me, revolution is always in the air. It’s certainly in the hearts of many people I speak to. And this makes me hopeful.” Best thing is to find a film of Gvasalia’s blue arena online and make up your own mind.