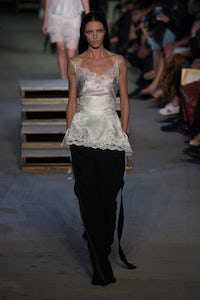 NEW YORK, United States — There is no calendar date more significant to New Yorkers than 9/11, so it would be impossible to conceive of a fashion event as significant as Riccardo Tisci’s same-day debut in New York that didn’t acknowledge the anniversary.

The designer insisted it was his artistic director Marina Abramović who was responsible for the monumental aspects of the show’s staging. The statuesque performance artists arranged around the riverside venue at Pier 26 evoked reconciliation, healing and hope — but the clothes Tisci presented also channeled uplift. And that was something of a surprise.

Tisci-takes-Manhattan could logically have been the rationale for a super-urban extravaganza, in keeping with the sportswear that has propelled Givenchy onto the torsos of kids the world over. Instead, he offered up a beautifully measured meditation on the thing that really makes the world go round, love.

A bride and groom were Tisci’s starting point. Black and white. A union where all that mattered was an emotional connection. As he said, “No colour, no sex, no religion.” Maybe that freedom was part of the American dream that Tisci has cherished since he began his career in fashion — the same multi-cultural freedom that he claimed to love on the streets of New York. But, if the inspiration was New World, the collection itself was gorgeously Old World in its laciness, its romantic flou and its extraordinary artisanship, from the simplicity of Kendall Jenner's swallow-tailed white lace slip dress, to the extravagance of Joan Smalls in a black velvet sheath that exploded into bubbles of tulle.

Mixing couture and ready-to-wear, womenswear and menswear, Tisci rolled his universe into a ball that felt simultaneously restrained and rich. Maybe too rich in the sense that some judicious editing might have honed his point, but at the same time the stately, ritualistic nature of the presentation, with its liturgical soundtrack, underscored the designer’s frequent emphasis on the tribalism of his aesthetic. And, right here, right now, at the 10th anniversary of Tisci’s time with Givenchy, there has never been a moment in his career where he seemed more shamanic.

As his models paraded through the rusted corrugated iron set that Abramović had designed, the contrast of exquisite elegance and raw brutalism offered up a comment on contemporary life as trenchant as anything else we are likely to see this season. 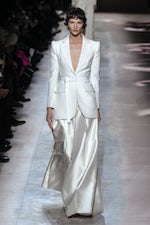 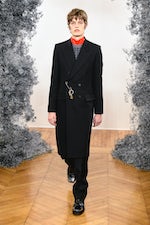 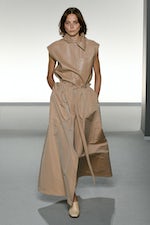 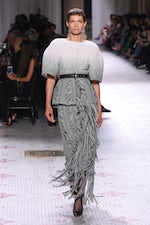