The young designer upped the voltage of his signature megawatt prints and made the banal look utterly brilliant. 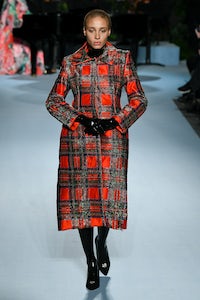 The young designer upped the voltage of his signature megawatt prints and made the banal look utterly brilliant.

LONDON, United Kingdom — Richard Quinn sure knows how to stage a fashion show. This time last year, the London-born designer had none other than Queen Elizabeth II sat next to Anna Wintour in his audience, despite it being his second ever show since graduating from Central Saint Martins. This time round, he had British singer Freya Ridings serenading us in one of his beloved screen-printed florals (Quinn invites fellow designers and fashion students to use his print studio in Peckham) as well as a starry cast of models, no doubt courtesy of his new collaborator, super-stylist Katie Grand.

But just when you thought it couldn’t get any more impressive, Quinn upped the voltage of his signature megawatt prints. Several of them were entirely embellished from seam to seam for maximum impact. He designed the ornate embroidery in London and worked with craftspeople in India to execute it on such a scale. They were only heightened by extreme silhouettes — perpendicular shoulders, whittled waists, bustled hips, puffball skirts and, occasionally, chin-grazing funnel necks — which was a result of his renewed fascination with corsetry and boning, a throwback to his days as an intern at Dior.

It may all seem rather grand for a young South London-based designer establishing a business. Yet he was inspired by the hallowed archetypes of haute couture, even closing his show with a silver-laden bride fluttering with ivory ostrich feathers and a downpour of confetti. “People reference couture a lot, but we wanted to delve into those techniques and how it’s relevant to us and what we want to say,” he explained. For Quinn, it offered a way to reinvigorate his beloved granny’s-wallpaper florals. Those, along the vintage-inflected checks and houndstooth coats, are the kind of tropes that require a bold perspective to get right. By saturating the colour, blowing up the proportions and blinging out the surfaces, Quinn managed to make the banal look utterly brilliant.

Admittedly, there was a sombre mood in the room as news of Karl Lagerfeld’s death emerged earlier in the day. Lagerfeld was the modern-day godfather of haute couture, the last of a generation who came of age in the Golden Age of it in the 1950s. He also came to the rescue of age-old haute couture ateliers such as Lesage and Lemarié by urging Chanel to purchase, and patronise, them. As Quinn made his sophisticated homage to that world, it was a poignant reminder that all is not lost. Today’s youth is tomorrow’s legends.