The collection was very much an evolution of Rocha's aesthetic, but a new degree of precision stood out. 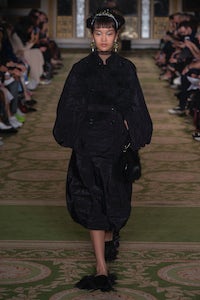 The collection was very much an evolution of Rocha's aesthetic, but a new degree of precision stood out.

LONDON, United Kingdom — The two halves of Simone Rocha’s heritage — Irish on her mother Odette’s side, Chinese on father John’s — find common ground in family and food, she said after her show on Sunday night. But both cultures also have a deep appreciation of all kinds of ritual and ceremony. So far it’s been Rocha’s Celtic roots that have added shape and mystery to her collections. With her latest, it was China’s turn, specifically the rite of Qing Ming, the day when ancestors are celebrated. Their graves are washed and decorated with small paper-clad figurines. They inspired Rocha’s paper suits (and a spectacular trench), and tiny floral embroideries, inspired by the carnations Chinese families carry to the graveyard.

But the past was most present in the collection in the designer’s references to the Tang Dynasty, considered by historians as the full cultural flower of imperial China. Rocha reprinted the faces of concubines she found on paintings in Hong Kong's markets, or she turned them into traceries of red embroidery on billowing white silk.

She set herself a quirky, technical challenge with this collection: how could she reproduce the distinctive silhouettes of Tang hairstyles in her own tailored style? The egg shapes wrapped in tulle were her answer. But Rocha also borrowed the wide-brimmed, veiled hats of the Tangs, and let the veiling cascade down the body. These effects were very much an evolution of the aesthetic Rocha has evolved for herself over the years: dark, romantic, slightly witchy. So China and Ireland were as happily co-existent on her catwalk as they were in the person of her parents seated front row. Even the colour palettes — the sensual rigour of Catholic black and white shot through with the vibrancy of Chinese red brocade — were compatible.

History lessons aside, what stood out in this collection was a new degree of precision. Rocha has always been about dramatic volumes, exploded or restrained. Maybe it was just my imagination running away with me, but I felt the presence of the human form beneath the clothes much more this time. What I wasn’t imagining was the flat, feathery shoes, like big, black sea anemones encasing the foot. I hope Rocha gets round to making a movie some day. She has a finely honed instinct for the macabre.