The designer tapped into the dreamlike fantasy popular elsewhere this season, but her signature optimism, colour and graphic clarity were missing. 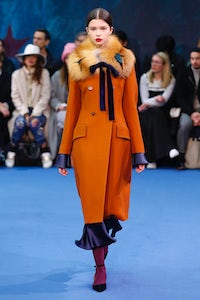 The designer tapped into the dreamlike fantasy popular elsewhere this season, but her signature optimism, colour and graphic clarity were missing.

LONDON, United Kingdom — Entering the Roksanda show venue, the audience was presented with painted walls depicting scenes where Matisse-like nudes reclined among moons, stars and cats. It turned out these images stemmed from drawings that Roksanda Ilincic used to make when she was little. To this innocence, the designer added the spice of Charlotte Rampling in The Night Porter and the moody, brooding photographs of the legendary Deborah Turbeville (the painted nudes referenced her Bathhouse Beauties).

Picking up on the romantic, darker mood in many of this season's collections, the clothes mainly stuck to a jewel tone colour scale and shapes that echoed the lush 1970s of Yves Saint Laurent, with flounce puff sleeves, lavish Paisley brocade and an abundance of bows — not to mention collars, which came in the shape of collarets, dogs ears, ruffled, or in the so-called Bertha style. (It seems safe to say collars and sleeves are Roksanda's favourite details.)

But the main news was the introduction of bags, from mauve clutches to doctor bags with metallic handles. It is a testament to Ilincic's talent that she has a healthy business built mainly on clothes and the bags rightfully played second fiddle to what was a very beautiful collection. "Vulnerability, but with a poetic beauty," the designer said, summarizing the show.

It seems that many brands are drawn to dreamlike fantasy at the moment, perhaps as a response to our increasingly bleak and sales-driven reality. It is, perhaps, fashion as an escape from tougher times, which is a valid response, of course. But here you also wondered if the designer could have taken another route, delivering the sheer optimism that Roksanda's clothes have been capable of in the past, with jolts of colours and graphic clarity. Isn't that what we sorely need? Especially when the sheer, long dresses that closed the show reminded you of the pieces you had seen the day before at Alexander McQueen. 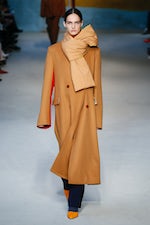 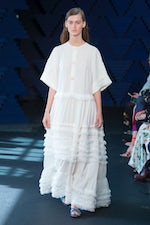 Folk and Fantasy at Roksanda 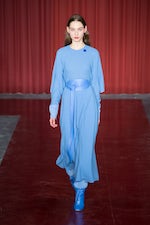 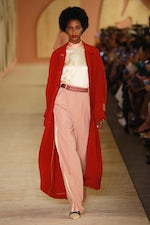