Roland Mouret Celebrates His 10th Anniversary With Some Time Travel

The boy is father to the man in a collection which evokes Mouret's earliest fashion memories. 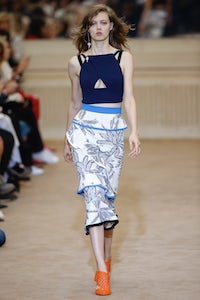 Roland Mouret Celebrates His 10th Anniversary With Some Time Travel

The boy is father to the man in a collection which evokes Mouret's earliest fashion memories.

PARIS, France — Speak, memory. To celebrate the 10th anniversary of his Galaxy dress, Roland Mouret travelled back in time to his 10-year-old self, to 1971 when a TV show called ‘Aujourd’hui Madame’ was his early education in fashion. Even then, the precocious little garçon was aware of clothes as a complement to the way the world was changing. It was that spirit of freedom and opportunity he sought to evoke in his new collection. And, mercifully, it seemed to free Mouret too, from the need to “design”, to add the tricksy little flourishes that might qualify clothes as a “fashion” statement — though he reminded us that he’s perfectly capable of making one of those when he closed the show with a rainbow of his Galaxy dresses,  the form-fitting numbers that first seared his moniker on the minds of his devotees.

The 1940s flavour of the Galaxy made sense when Mouret talked about the way in which his young mind was moulded by the early 1970s. The two decades enjoyed a lively dialogue (YSL’s Spring 1971 “collaboration” collection being its consummate expression). These new looks took their cue from the Galaxy’s structured sensuality, but Mouret blurred it with a summery off-the-shoulder indolence, truly a case of looking to the past to find a path to the future. Fitted tops criss-crossed over skirts which fell to mid-calf in tiers of ruffles; one-shouldered tops flounced over little fitted skirts with fluted hems; one halter-necked show-stopper featured a vibrant paisley jacquard. Mouret let colour do a lot of the talking for him. Wise move, with navy and white a smart backdrop to sunny oranges and yellows, peach, peppermint and cornflower blue. They injected an energetic nowness into Mouret’s retro reverie.

Editor’s Note: This article was revised on 4 December, 2016. An earlier version of this article misstated that Roland Mouret's Spring 2016 show marked the company's tenth year in business. This is incorrect. The show instead marked the tenth anniversary of the label's Galaxy dress. 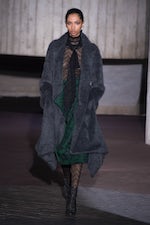 At Roland Mouret, Women On the Verge 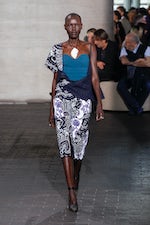 A Folksier Flair at Roland Mouret 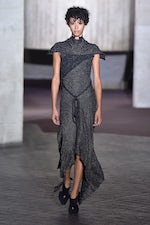