The designer has proved himself far ahead of the curve on hot ticket issues like upcycling, recycling and circularity. And he’s doing it with a pure couture sensibility. 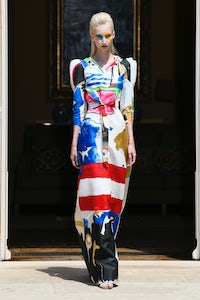 The designer has proved himself far ahead of the curve on hot ticket issues like upcycling, recycling and circularity. And he’s doing it with a pure couture sensibility.

PARIS, France — Ronald van der Kemp called one outfit in his latest collection “The Prom, The Morning After….” It was a strapless pink techno jacquard party dress with a black floral design, trimmed in grey fringe, and it made me think of the late Marie Seznec, Christian Lacroix’s favourite model. Her signature was her prematurely grey hair, and she was often decked out in one of Lacroix's big pink party dresses. Such a dazzling comparison sat easily with RVDK. He managed a few more. Like “10,000 Stitches,” a column of blush mousseline whose draped construction echoed Vionnet. Or “Bianca 2.0,” the kind of sleek white tuxedo that Mrs. Jagger made her own in her glory days. Remarkably, the trousers for that ensemble were repurposed sailor pants.

But, no! That’s not remarkable for RVDK. At least 98 percent of the outfits, accessories included, in his show were made from vintage, overstock, scraps of this and that. When he launched five years ago, people scoffed, “How is that a business model?” Who’s laughing now? He has proved himself far ahead of the curve on hot ticket issues like upcycling, recycling, circularity, all in the service of the Big S – Sustainability. And he’s doing it with a pure couture sensibility. RVDK has stopped wholesaling, or working with retailers (he claims he never really believed in it anyway). Now his business is all private clients. “It’s the only way to go if you want to do high fashion,” he insisted.

True enough, when you considered the complexity of the creations RVDK had wrought with his convictions. For instance, the look called “Ban Fake Fur” was his effort to recreate the idea of fur, without the toxicity of the fake. He made tubes out of recycled down, duplicating the physical form of the skins in a mink coat, then wrapped them in a vintage silk print. It was an audacious revision of a conventional emblem of luxury. Later, RVDK used the same technique again with a “cheetah” bolero.

That tubular situation was also responsible for “Peace!” — dozens of vintage silk, mousseline and chiffon remnants rolled into fringes of multi-coloured spaghetti and ingeniously strung together in a floor-length bias-cut gown. Such extravagance was balanced with the relative restraint of sharply tailored suits, patchworked denims and black leather dungarees. They underscored the fact that RDVK is perfectly capable of realising his broad vision within what some would surely see as the restrictions of re-use. “It’s more inspirational to work this way than if I could do whatever I wanted,” he countered. “It’s not about a thousand layers of tulle. It’s about every single piece making the best of what you’ve got.”