The designer filled her first-ever fashion week presentation with clothes that rose above the minimalist heap. 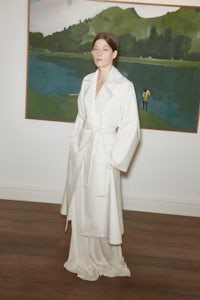 The designer filled her first-ever fashion week presentation with clothes that rose above the minimalist heap.

NEW YORK, United States — What's in a surname? Rosetta Getty has a famous one. And yet the success of her ready-to-wear line, launched just a few years back, appears to have very little to do with that lucky circumstance.

Instead, the Los Angeles-based designer’s strong sell-throughs and loyal customer base rely on the wearability — and desirability — of the clothes, which are conceived with admirable intent. Consider her obsession with day-to-night dressing. For Getty, this isn’t a slogan, but a necessity for the sort of life she lives as a working mother. Her mullet-hem trousers, split-apron ribbed tees and fringed-mesh camisole — made to look like chain mail but significantly easier to sit down in — can be worn anytime, and that’s not lip service.

Up until this season, Getty abstained from a formal showing, opting to meet with editors and buyers for one-on-one appointments. For her first live-action event, she called upon her husband’s aunt, Aileen Getty, who not only very generously opened the doors of her impeccable West Village townhouse to a mess of fashion editors, but also offered her modeling services. Alongside Aileen, Getty installed folks like emerging artists Alexandra Marzella and Bunny Rogers in different rooms of the house, dressing them in her trapeze dresses and crepe de chine apron-wrap trousers.

Getty’s clothes can be subdued, but this presentation quickly turned into a proper fête, with vignettes of looks influenced by the work of women she admires, whether it was Georgia O’Keeffe — a major inspiration for this particular collection — or the late Belgian filmmaker Chantal Akerman, whose scenes she returns to time and again. Now that Getty has had her coming out party, though, it would be nice to see her dial her designs up a notch. She clearly loves texture and form, and when she aims to get something just right — as she did with a new cut-out sandal style — the collection rises above the minimalist heap.