The designer's flourishes may make her dresses worthy of a night out on the town, but her references often hit closer to home. 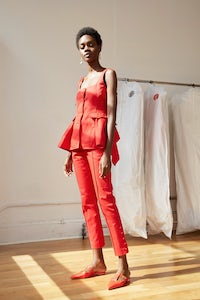 The designer's flourishes may make her dresses worthy of a night out on the town, but her references often hit closer to home.

NEW YORK, United States — Rosie Assoulin is perhaps best known for making flamboyant, stylish party clothes, but she is often led back to the essence of what it means to be at home — and with family. As a mother of three, her references this season were rooted in the things many of us remember from childhood: collecting seashells, whipping out those thick white "Vanity Fair" paper napkins, embossed with little flourishes, for picnics. She decorated the collar of a to-the-floor pink silk shirt dress with real shells and embroidered a white cotton sundress with a shell motif.

Many of her colourful cornucopia of gowns, voluminous with gathered sleeves and pin-tucks, belonged in a stately sitting room — if people still had those. White cut-outs reminiscent of those Vanity Fair napkin scrolls where applied up the sides of turmeric-coloured design, while a rainbow-cameo print adorned an orange-sherbet coloured pleated a-line number. Then there was a more closely cut column made of lace inspired by doilies. "Not your mother's doily dress," Assoulin asserted. Perhaps not, but in this case, the air of domesticity was a good thing.