Hard and soft, precious and plain, masculine and feminine: the juxtapositions were as simple as that — but this time commercial savviness defused the label's seductive peculiarity. 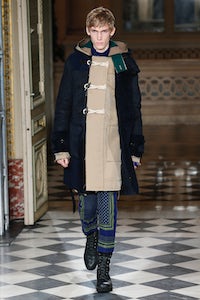 Hard and soft, precious and plain, masculine and feminine: the juxtapositions were as simple as that — but this time commercial savviness defused the label's seductive peculiarity.

PARIS, France — The Japanese word for love is “ai.” Sacai’s new men’s collection was named LIIFE — love with extra life. And that’s just what the collection was about: added value, Sacai with something extra. The two-in-one idea has been a cornerstone of Chitose Abe’s increasingly influential — and successful — collections for women. Daisuke Gemma, her right-hand guy, explained today that they were insinuating the notion into menswear. It was immediately obvious in the twinned coat that ambled onto the catwalk. What wasn’t so obvious in the outfits that followed was how integrated the coats, jackets and waistcoats were. The models looked a lot like college boys who’d wantonly layered up in duffels and parkas and peacoats, with the old collegiate stripe offered in shearling. Hard and soft, precious and plain, masculine and feminine: the juxtapositions were as simple as that. Which is perhaps why they weren’t as striking as usual, although each garment had been given special extra treatment. (Even the shoes were garment-dyed.)

Maybe there was a familiarity here which defused the seductive peculiarity that has certified Sacai as a stone gon’ fashion cult. There were flashes of brilliance — the blazing vermilion jacket in heavy cotton canvas over oxblood velvet, the inside-out biker, the bandana prints repurposed as pyjama suits — but they were exclamation points in a collection where the commercially savvy was dominant. Hey, the world would be a better place in Sacai, so we’re not complaining. 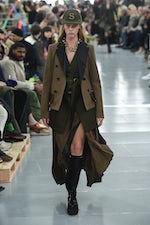 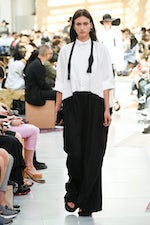 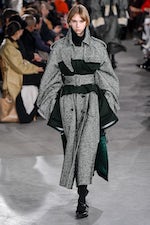 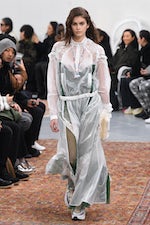