The clothes looked strongest when they were at their most uniform, when the men and women joined forces for the finale and you could see the Sacai tribe in all its glory. 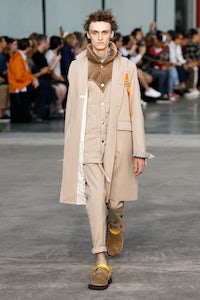 The clothes looked strongest when they were at their most uniform, when the men and women joined forces for the finale and you could see the Sacai tribe in all its glory.

PARIS, France — The gorgeous hybrids Chitose Abe creates for Sacai have often defied immediate comprehension. What exactly is it we’re looking at? Lawrence Weiner, one of the deans of American conceptual art, has a similar effect. What is he trying to say with his famous word pieces? Chitose reproduced one from 2012 in the collection she showed on Saturday: STASIS AS TO VECTOR (ALL) IN DUE COURSE.

With all the will in the world, it was hard to make much sense of that and, printed top to bottom on parkas and shorts from her spring collection for men, and tops and skirts from her women’s resort collection, it appropriately came to seem more like a uniform abstract pattern.

And maybe that was the point. There was a deliberate uniformity in both collections, a top-to-toeness that was Chitose’s way of making a comment on stereotyping, because you could scarcely judge a book by its cover if that cover was designed by Chitose Abe.

Her three-piece suit, for instance, was fringed cowboy-style. The classically sporty shirt shorts parka troika that ruled the collection was refracted through so many colours, patterns and textures that its uniformity turned idiosyncratic.   Chitose claimed that was her connection with Weiner. “You should live life the way you want,” she said through her translator. “Whatever is happening in the world, you should follow your own path.”

The irony was that the clothes looked strongest when they were at their most uniform, when the men and women joined forces for the finale and you could see the Sacai tribe in all its glory and realise the fundamental weirdness of the world that Chitose Abe has made, with the able assistance of her major domo Daisuke Gemma.

Her inclination to yellow and green (retailers’ least favourite colours) in a lustrous silk that looked just like ripstop nylon; her marriage of banker’s stripes and arctic knits; her refusal to acknowledge the logic of sleeves; her boucles and velours and terrycloths, which might not be that because, she says, “We’re not so sure what’s the truth.” Yes, all together, en masse, it could be pleasingly construed as uniform, but, as Lawrence Weiner once said, “It’s all in due course. Each thing. Each person’s accomplishments change the world.” Here's to the individual.